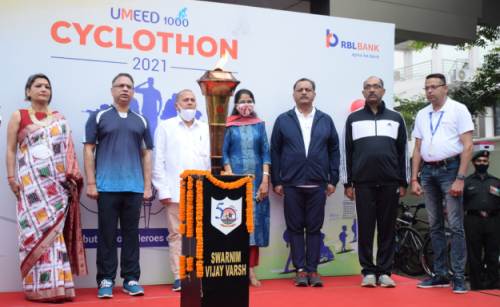 RBL Bank, one of India’s leading private sector banks, organized a 100-km Cyclothon under its flagship CSR initiative, UMEED1000 Cyclothon. The event saw the participation from 70cyclists of the Bhubaneswar Cycling and Adventure Club which included senior bureaucrats, along with RBL Bank employees, cyclists from the Indian Armed Forces and Sainik School.

The Swarnim Vijay Mashaal was brought to the RBL Bank organized cyclothon by the Indian Army from their base in Bhubaneswar. The Mashaal symbolizes India’s victory in the 1971 War. It was lit by Prime Minister Narendra Modi on 16th December 2020 and is on course to various parts of the country. Further expedition will start after paying tribute to the flame. On this occasion, all the participants remembered and paid respect to the war heroes of 1971.

This programme is a run-up to RBL Bank’s flagship CSR initiative, UMEED1000 Cyclothon, where cyclists will undertake the challenge of covering 1000 kms each, over a span of 14 days, to raise funds. The participant cyclists united to raise awareness on RBL Bank’s CSR initiative of inclusive education focusing on children with disabilities, person with disabilities, children from underprivileged communities and adults who dropped out of school.

Speaking on the occasion, Vishal Kumar Dev said, “Education is the key to building a strong nation. It is inspiring to see the nation’s brave hearts, the Indian Army, and senior officials join hands together with RBL Bank’s cyclists to cover 100 kms for the noble cause of inclusive education.”

Shanta Vallury Gandhi said: “RBL Bank is a socially responsible organization and is totally committed to serve the marginalized communities through its various CSR programs…Through this initiative, RBL Bank is determined in its perseverance in extending the best possible hand of help and encouragement for our collective dream of inclusive education to those who get left behind. Additionally, through our mission of inclusivity, we are extremely delighted to be a part of Swarnim Vijay Mashaal’s journey and pay our tributes to the 1971 War Heroes.”