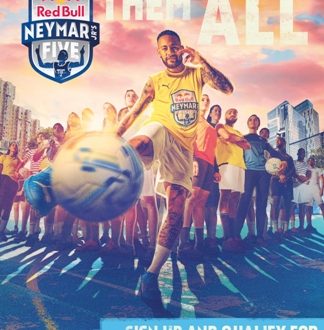 The biggest five-a-side football tournament in India and Globally, Red Bull Neymar Jr’s Five returns for its sixth year in India with qualifiers across the country. The 2022 edition of the championship will have qualifiers in 19 cities across India. The qualifiers will take place through the months of March and April, with a national final slated to take place in May.

Winners of the city qualifiers will compete in the national final, where the ultimate winner will be declared the Red Bull Neymar Jr’s Five India champions and get a chance to compete in the world finals in Qatar, where they will get to meet superstar footballer Neymar Jr.This year, there’s also an added twist, with all the teams that had qualified for the cancelled 2021 event being invited back to compete in the World Finals, which will be hosted by Qatar for the first time.

Amateur teams from all over the globe get the chance to participate and represent their country during the World Final and win a unique experience: to play against Neymar Jr in the “Super Final”. Winning teams of 2021 and 2022 edition will be travelling for World Finals. For the first time ever, it also opens up the tantalising prospect of ‘derby’ matches – where two teams from the same country could go head-to-head against each other.

Red Bull Neymar Jr’s Five is the Brazilian star’s signature five-a-side tournament bringing players aged 16 to 35 from all corners of the world together to celebrate their shared passion: football. It is a fast, technical and fun competition which sees two teams of five players, sans a goalkeeper, have 10 minutes to strut their stuff and win a chance to impress Neymar Jr. The twist in this thrilling affair is that for each goal scored by a team, a member of the opposition will have to leave the field. The team with the maximum players takes the spoils.

“It’s been a long wait, but finally we’ll get to see some fantastic teams from around the world coming together this year,” said an excited Neymar Jr. “I can’t wait to see who comes out on top in this special ‘Super Final’. It’s always an exciting challenge to take on the tournament champions,” added the 30-year-old forward. “They get the chance to try a few of their tricks on me, and I reply with a few of mine. It’s just great fun for everyone involved.”

It’s shaping up to be a fascinating year of football for Neymar Jr, who is still hunting trophies with Paris Saint-Germain in Ligue 1 and the Champions League. Then, before he returns to Qatar later in the year to try and fire Brazil to glory at the World Cup, he’ll join the planet’s best amateur players for this tournament at Qatar Foundation – a non-profit organization made up of more than 50 entities working in education, research, and community development.

Red Bull Neymar Jr’s Five 2019 India Champions, Kalina Rangers from Mumbai represented India at the World Finals in Brazil and gained valuable experience with a historic win against Hungary, who were eventually crowned winners of the tournament. Some members from this team are part of the 2021 national champion squad which will travel to Qatar this year to compete at the world finals.

With a host of teams from last year already assured of their ticket to the Red Bull Neymar Jr’s Five World Final, attention now turns to the upcoming local and national qualifiers. To find out which countries are participating, and details on how to register a team, players can visit www.redbullneymarjrsfive.com.