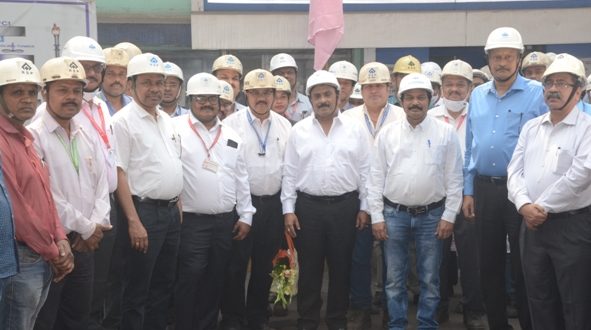 Similarly, Blast Furnace-5 has also recorded its best ever single-day hot metal production of 10,517 tonnes on Tuesday, with which it reached the stupendous productivity level of 3.01.  The previous single-day best of 10,025 tonnes was recorded on December 30, 2020.

The feat was achieved because of the integrated team effort of all the associated departments like Sinter Plant, Raw Material Handling Plant, Coke Ovens, Traffic and Raw Material, Captive Power Plant, Oxygen Plant, Production, Planning and Control Department and Research and Control Laboratory, the quality supply of raw materials and the determined efforts of the Blast Furnace collective.

RSP Director In-Charge Atanu Bhowmick visited the Blast Furnace-5 today and congratulated the department collective as well as their associated units on achieving this rare feat.

Bhowmick commended the efforts of the collective for achieving the production targets and emphasized upon maintaining consistency. Expressing satifaction over the consistent brilliant performance of the units, he urged the collective to ensure steadier production in the entire chain of units. He also urged all to make every possible effort to achieve high safety standards.

The collective led by the CGMs and HoDs of the respective departments reiterated commitment to give their best and help RSP achieve further glory in the days to come.