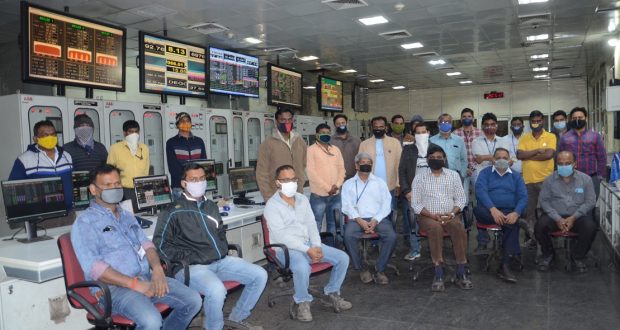 Captive Power Plant #3 of Rourkela Steel Plant (RSP) consisting of Steam Turbine Generators in Power Blowing Station, Top Recovery Turbine Generator and Back Pressure Turbine Generator generated a record of 48.11 MW of electrical power on Wednesday. This is the highest average daily power generation in CPP#3 since the inception of these units during 2013-15.

Earlier on 26th October, 2020 the unit registered a record by producing 46.70 Megawatts of electricity which was subsequently broken the very next day when it produced 47.73 Megawatts of power on a single-day on 27th October.

This was possible through number of incremental system improvements like enhancing the vacuum in condensers in STG #1, STG#2 and Turbo-blowers during the recent capital repairs of Boiler#1 in January 2021; enhancing the reliability of boilers and related auxiliaries; revival of acid dosing system in cooling water circuit, rationalisation, optimisation and balancing of steam generation in boilers and their effective utilisation in turbine generators and turbo-blowers. Also, the TRTG unit was operated continuously at the near maximum potential and the BPTG was operated at a higher range of steam utilisation.

This is a great achievement considering the fact that this record power generation was done in addition to the continuous supply of  the required cold blast volume of 3,30,000 Nm3 of  air  with pressure of 4.10 kg/cm2 to Blast Furnace#5 for hot metal production .

This feat by CPP#3 was facilitated by the support and efforts of EMD, Blast Furnaces Department, CDCP, Instrumentation Department, Centralised Electrical Departments etc.