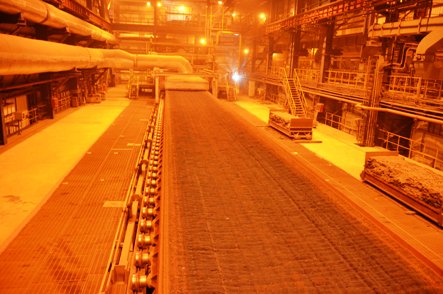 Rourkela Steel Plant (RSP), a unit of state-run SAIL, kept the graph rising in all key production areas in the first eleven months of the current financial year i.e. FY22.

The oven pushing from Coke Oven Battery-6 also witnessed the best ever figure of 89.2 in the above period. The total sinter production too reached the highest level of 63,71,513 tons.

The Rolling Mills kept pace with the Iron and Steel zone. Plate Mill rolled out its all-time best 4,99,267 tons of plates while rolling of plates in New Plate Mill touched the best-ever 8,41,302 tonnes. Hot Strip Mill-1 made 16,11,582 tons of HR Coils which is the best ever performance since inception of the over 60 years old Mill. Dispatch of saleable steel on the other hand touched the all-time high figure of 32,79,484 tons in the first 11 months of the current fiscal.

Congratulating the RSP collective on this splendid show, Director Atanu Bhowmick said that the record-breaking performance of RSP in the current fiscal in spite of the two waves of COVID-19, is an eloquent testimony to the commitment and dedication of the employees.