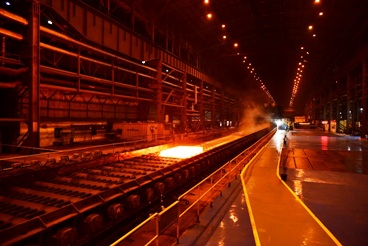 Rourkela Steel Plant (RSP), a unit of Maharatna Company SAIL, has registered the best ever performance in key areas in the first seven months i.e. April-October period of the Financial Year 2021-22. The Steel Plant produced 24,63,448 tonnes of hot metal, 22,96,815 tonnes of crude steel and 20,90,372 tonnes of saleable steel to clock its best April-October performance in the respective areas since inception and achieved a remarkable growth of 30.7%, 31.1% and 35.3% respectively over CPLY (Corresponding Period Last Year).

The earlier best April-October performance in all these key areas were achieved in FY19. Besides, different Mills of RSP exhibited brilliant performance to bolster the overall performance of the plant. The Steel Plant produced 10,29,730 tonnes of total HR Coils, 3,07,083  tonnes of Plate Mill Plates and 5,35,101 tonnes of New Plate Mill Plates to register the highest ever April-October performance. With an all-time high production of 39,78,163 tonnes of sinter during the first seven months of the current fiscal, the Sinter Plants complimented the success story. The Oven Pushing from Coke Oven Battery-6 also witnessed the best ever figure of 88.3 in April-October 2021.

The dispatch of the Steel Plant also excelled in tandem with production. RSP dispatched 21,04,541 tonnes of saleable steel to clock the best ever figure in the first seven months since inception with Plate Mill, New Plate Mill and HR Coil for Sale registering the best ever dispatches simultaneously. RSP registered an overall growth of 27.8% in dispatch over CPLY.

Notably, all the major units of the Steel Plant achieved their APP targets in October, 2021. The New Plate Mill was the peak of the departments which registered its best monthly production of 87,579 tonnes of plates in October, 2021.

Another highlight of the month was the re-commencement of rolling from the new state-of-the-art Hot Strip Mill-2 of RSP on October 31, 2021 as a part of the process of stabilization.

Amarendu Prakash, Director In-charge, BSL & RSP while congratulating the collective over the remarkable performance said, “Let’s sustain the momentum to reap rich dividend from the prevailing favourable market. Our focus needs to be on further enhancing the techno-economics to negate the impact of the recent spate of increase in imported coal cost. The recommencement of rolling in HSM-2 would help RSP explore niche market segments and reinforce its presence in the global market.”