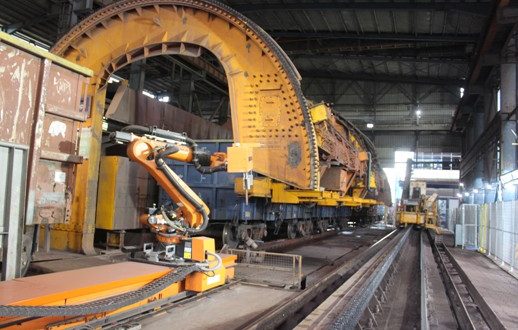 The tippling operations at the Raw-material Handling System of the steel plant, involves critical activities like decoupling, coupling, rotation and CBC alignment of wagon through manual intervention at inhaul and outhaul side.

During every cycle, after a Wagon tippling operation on Tippler table, the empty wagons are to be coupled with empty wagons in the outhaul area. For successful coupling of both Wagons, the couplers alignment is mandatory which is now being done manually by designated person under high risk potential. So, to eliminate the man-machine interface while handling Railway wagons after tippling operation during each cycle, a new system of “Robotics Operation” has been introduced for Wagon Tippler.

Under the new system of operation, the Wagon couplers at outhaul, before getting coupled, will be inspected through and aligned by a Robotic system. This will eliminate the man machine interface completely during each cycle of tippling, ensuring safety while contributing to enhanced productivity.

The new system has been installed in one of the Wagon Tipplers and will be horizontally deployed in others as well. This system is also supplemented by a uniquely designed Smart Fencing System with Automated Gate Locking Facility for restricting unauthorized entry during equipment operation