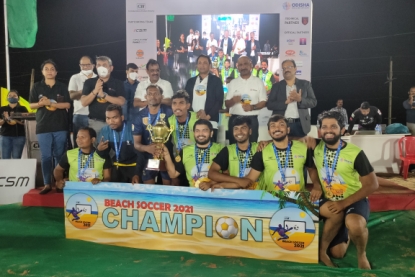 Tata Steel got the better of the Paradeep Port Trust (PPT) to win the championship title of the Beach Soccer 2021, at Chandrabhaga Sea Beach here on Tuesday.

The champion team defeated PPT t2-1 in the penalty shootout in the final today.

Sunando Sen of Team Nalco was adjudged the ‘Player of the Tournament’.

Odisha Minister for Industries, Capt. Dibya Shankar Mishra, who graced the closing ceremony as chief guest, presented the champion trophy to the winners.

This was the first of its kind beach soccer festival in Odisha organised by the Confederation of Indian Industry (CII) in association with Department of Tourism, Government of Odisha. Odisha Football Club (OFC) was the Technical Partner of the event.

“We are delighted to see the huge response that the first edition of Beach Soccer has received. It’s the team spirit of the players that made this initiative a grand success,” said Rajiv Kumar, Chairman, CII Beach Soccer.