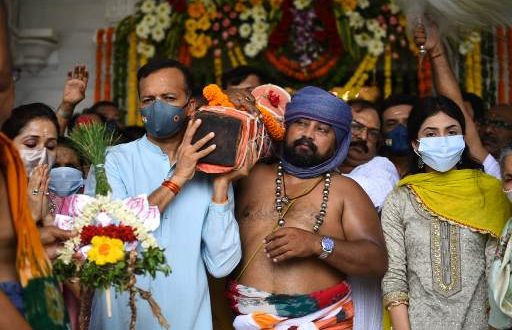 Thousands of devotees joined the first ever Rath Yatra festival held at Devbhoomi, Jindal Nagar here today. The chariots of Lord Balabhadra, Devi Subhadra and Lord Jagannath embarked on their annual sojourn from the Temple in Dev Bhoomi to Gundicha Temple in the township.

Jindal Steel & Power Ltd. (JSP) Chairman Naveen Jindal joined the Rath Yatra celebrations with his entire family. He participated in the ‘Pahandi Vidhi ‘and performed ‘Chhera Pahanra’, the symbolic ritual of cleaning the way for the grand chariots before the start of the Rath Yatra.

Attending this auspicious occasion, Naveen Jindal in his greetings said, “I am extremely humbled and feeling blessed by performing this Chhera Pahanra Neeti. I pray before the Almighty to bless us all to serve the society. May Lord Jagannath bless us all and Happy Rath Yatra to All”.

All the rituals were done in line with the ritual followed in the Jagannath Temple at Puri. The auspicious day started at 4.30 am with Manima Daka and Dwar Phita (Door Opening) Neeti followed by Mangal Aarati, Mailam, Tadap Lagi, Abakash Neeti, etc.

JSPL Foundation Chairperson Shallu Jindal joined the early morning rituals and performed all the pujas like Rath Pratishta and others with full devotion under the guidance of the chief priest of the temple.

The special attraction of this grand festival was that Lord Subhadra’s Rath was pulled by girls and women with great enthusiasm.

With an aim to reach to the maximum number of devotees the Rath Yatra was also telecast live through digital media like Facebook and YouTube through which thousands of devotees got an opportunity to witness the festival.