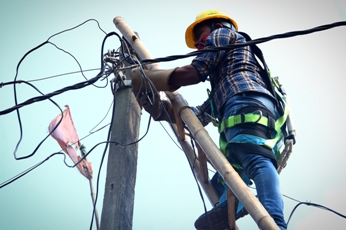 With the primary objective of supplying reliable power to all its consumers, TP Central Odisha Distribution Limited (TPCODL), a joint venture between Tata Power and the Government of Odisha, has been focusing on upgradation of existing electricity distribution infrastructure and augmentation of the same.

TPCODL has recently undertaken a number of initiatives in Cuttack district in this regard.

TPCODL has installed over 6,000 new poles replacing low-height, old, and faulty poles across its five divisions under Cuttack electrical circle to ensure continuous and reliable power supply in this area. To ensure a safe network for electricity supply around 3,700 tilted poles have been straightened and over 500 double pole structures are installed. The Company also took up strengthening of mass scale power network in 169 feeders resulting in better service to the customers like 11 KV Paramhansh feeder under City Distribution Division-II where tripping was a major issue for a long time. Similarly, feeders at Nahalpur, Ramkumarpur and Ayadpur under various divisions have helped in irrigation and agriculture in a major way by supplying quality electricity to the area.

TPCODL has refurbished as many as 96 Distribution Sub-Stations and installed 67 new 11 KV AB Switches at various locations in the circle which have proven helpful in enhancing reliability and uninterrupted power supply in various localities.

Safety of people is treated with priority at TPCODL. To avoid any mishap happening to people and stray animals at open electrical establishments like transformer stations, TPCODL has undertaken fencing work at 240 places. Similarly, appropriate road crossing measures have been taken at around 230 places to avoid any accident.