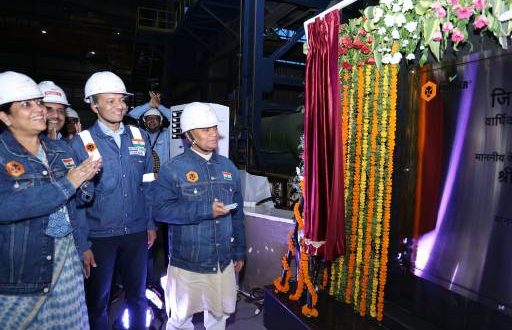 Union Steel Minister Ram Chandra Prasad Singh on Thursday dedicated TMT Rebar Mill of Jindal Steel & Power (JSP) at its 6 MTPA (million tonne per annum) integrated steel complex at Angul. The 1.4 MTPA capacity TMT Rebar Mill is one of the world’s largest and most mdern Rebar Mill, and the only producer of 50 mm width TMTs in India.

Additional Secretary (Ministry of Steel) Rasika Chaube was also present during the programme.

“India has become the second-largest steel producer in the world, leaving behind major economies. The maximum amount of steel has been produced from Odisha. I appreciate Naveen Jindal for building such a beautiful mega steel plant in Odisha,” said Minister Singh, while appreciating JSP’s plan to expand the capacity of the steel plant to 25.2 MTPA.

The Union Minister was highly appreciative of JSP’s timely effort to supply Liquid Medical Oxygen to the country during COVID-19 as part of its CSR initiatives.

Union Minister Singh along with a team of senior officials from the Ministry of Steel also visited the JSP’s 2 MTPA Coal Gasification Plant (CGP), the first of its kind in steelmaking. The CGP uses high ash and locally available non-coking coal to supply synthetic gas to the world’s first syngas-based DRI plant. JSP is the only company in India which is using coal gasification technology to produce steel at its plant in Angul. The coal gasification plant is equipped with carbon capture technology. It captures approximately 2,000 tonnes of CO2 per day, helping reduce carbon footprint significantly. The technology can also harness the abundant coal reserve of the country and make India Atmanirbhar (self-reliant) in meeting its coal requirement and reduce the dependence on imported coking coal.

Speaking on the occasion JSP Chairman Naveen Jindal said, “We are privileged that Hon’ble Union Minister dedicated the 1.4 MTPA TMT rebar mill at our Angul steelmaking facility. It is one of the most modern and largest rebar mills in the world. In addition to producing high-quality TMT rebars of different specifications for quality infrastructure building, the Rebar Mill will generate lakhs of indirect employment”

Thanking the Union and State governments for extending support to the steel industry, Jindal said that the vision of the Hon’ble Prime Minister for coal gasification technology is being translated into a big reality by JSP.

JSP Managing Director VR Sharma said, “JSP is a futuristic company which has the vision of producing at least half of its capacity through coal gasification which is key to green steel making for a sustainable tomorrow.”.

Nilesh Deore, Private Secretary to the Union Steel Minister; and Mukesh Kumar, Director at Steel Research & Technology Mission of India, accompanied the Minister during the visit.

JSP CEO-Steel, DK Saraogi, thanked the Union Minister and his team for dedicating the Rebar Mill to the nation and visiting the steelmaking facility.

JSP is operating India’s most modern 6 MTPA Integrated Steel Plant at Angul which is also the largest steel plant in Odisha.

Part of the OP Jindal Group, JSP has a significant presence in the steel, power and mining sectors, with investments worth around Rs 90,000 crore across the globe.