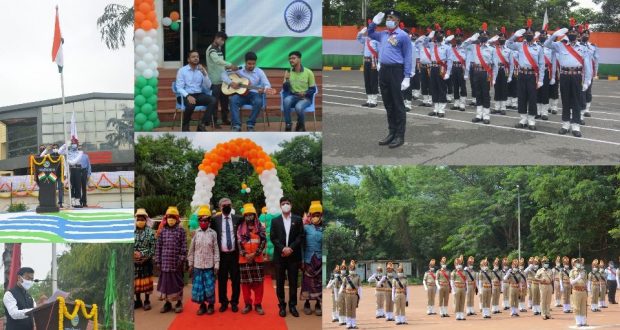 Vedanta Aluminium, India’s largest producer of aluminium and value-added products, on Sunday joined the Nation in celebrating the 75th Independence Day of the country with patriotic fervor with employees, stakeholders and community members at its operations in Lanjigarh and Jharsuguda in Odisha.

The highlights of the event included a spectacular march past by the company’s security personnel, hosting of the national flag by Deputy CEOs of both operations, award ceremony for the best performers from security teams, tree plantation and celebrations with local communities. The special day was also celebrated with beneficiaries of nearly 40 Nand Ghars, which are anganwadis modernised by Vedanta that act as centres of women & child development in rural India, along with village sarpanches, ward members, etc.

Marking the occasion, Rahul Sharma, CEO – Aluminium Business, Vedanta Ltd., said, “Aluminium is a strategic metal, with critical applications in key growth sectors such as defence, aerospace, automobile, infrastructure & construction, electrification, and many more. Being India’s largest producer of aluminium, Vedanta Aluminium Business is on a mission to make India the aluminium capital of the world, through innovation and value-addition. On Independence Day, we reiterate our vow to fuel the country’s self-reliance in critical raw materials like aluminium and establish our great nation as the top manufacturing destination for the world, leveraging deep R&D, cutting-edge technologies, our talented human capital and sustainability-focused operating procedures.”

Aluminium is the second most important metal in the world today, and is poised to see exponential growth as the demand for its versatile properties finds diverse applications across critical sectors like aerospace, defence, automobiles and electric vehicles, electrification, building & construction, renewable energy, and many more. As countries and companies world over look for new manufacturing destinations, the domestic aluminium industry, which has been deemed as a Champion Sector by the Government of India, has a crucial role to play. Looking at the potential for numerous applications in the indigenous space programme, Smart Cities, National Infrastructure Plan, the Affordable Rental Housing Complex (ARHC) scheme,100% rural electrification, renewable power etc., Vedanta Aluminium Business is on the leading edge of developing emerging applications of aluminium for a resurgent India.

Vedanta rolled out an ad film ‘Aatmanirbhar Bharat Ke Liye’ and a music video ‘Hum Hindustani’ to mark the 75th Independence Day. The Aatmanirbhar Bharat ad film highlights the potential of India’s significant mineral wealth to boost the national aspiration of socio-economic prosperity and poverty alleviation. The natural resources sector holds the potential to contribute approximately $1 trillion towards India’s drive to become self-reliant. The mining policy reforms, which aim to liberalise the industry by opening opportunities for private players, can generate 5 lakh new jobs. Within five years, India’s mineral production could soar by 200%, while its trade deficit in minerals falls by 50%.

The second film ‘Hum Hindustani’ is a music video is an ode to human resilience, sung by stalwarts of the Indian music industry along with Anil Agarwal, Chairman – Vedanta Resources. The song encapsulates the strength, togetherness and humanity that has bound the entire country, as it strives to overcome the pandemic.

Vedanta Aluminium Business, a division of Vedanta Limited, is India’s largest manufacturer of aluminium, producing half of India’s aluminium at 1.96 million tonnes per annum (MTPA) in FY21. It is a leader in value-added aluminium products that find critical applications in core industries. With its world-class Aluminium Smelters, Alumina Refinery and Power Plants in India, the company fulfils its mission of spurring emerging applications of aluminium as the ‘Metal of the Future’ for a greener tomorrow.