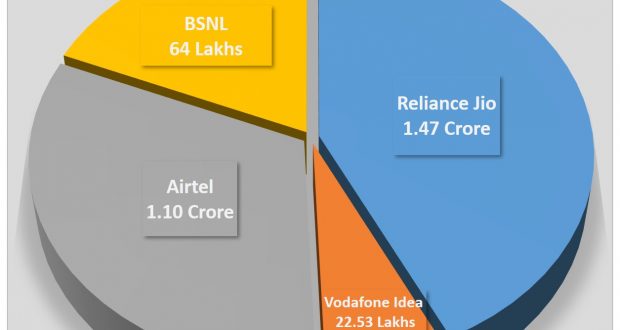 With 1.47 lakh new subscribers, Jio tops in subscriber addition in Odisha in May: TRAI Data

Marching ahead as the most preferred digital service provider in Odisha, Reliance Jio added highest number of new mobile subscribers in the state in May 2021 while competitors like Airtel and Vodafone Idea lost thousands of subscribers during the same period, revealed the latest telecom subscriber data released by TRAI.

Nationally, Jio also dominated subscriber addition in May 2021 as it was the only service provider to have added new subscribers while others lost millions of them. As per the subscriber data released by TRAI, Reliance Jio added over 35.54 lakh subscribers pan India in the month of May 2021. During the same period, Airtel lost the highest 46.13 lakh mobile subscribers followed by Vodafone Idea which lost over 42.8 lakh subscribers in the month.

Notably, Reliance Jio is the No. 1 digital service provider in Odisha with highest number of subscribers and over 50% share in gross revenue of the sector in the state. Reliance Jio has consistently been adding highest number of new subscribers every month over the last few years, powered by its largest true-4G network, rapid expansion into hitherto unconnected areas and affordable rates along with seamless high-speed internet across the state. Jio has also successfully completed deployment of the additional 20 MHz spectrum acquired in the recent spectrum auctions, across Odisha, further enhancing network, speed, and subscriber experience in the state. Jio has also been fast expanding high-speed broadband service JioFiber and is already available in key areas of over 26 major cities and towns of the state while continuing expanding to more cities and towns in a rapid pace.