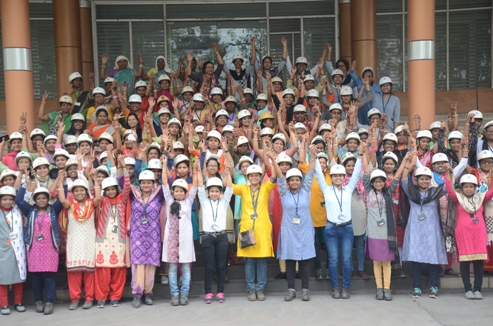 While celebrating International Women’s Day on Tuesday, Rourkela Steel Plant (RSP) will also cheer its large number of women employees who have not only excelled in various fields of endeavours but have also forayed into many a field earlier known as ‘male bastions’. Women can now be seen on Shop floors, operating cranes and pulpits apart from offices, schools and hospitals.

“For a woman to look forward to having a career in a non-traditional field is a challenge both in terms of physical and mental condition, with perpetual societal and psychological restriction. In this self-chosen journey of working as an engineer in shop floor I put myself in the way of things happening, worked in unison with my teammates and saw things happening. A bit of support and encouragement will see women creating success stories in this field,” says Sunita Singh, CGM (Production Planning & Control) also a mother, a wife and a daughter-in-law.

Singh, an alumnus of NIT, Rourkela joined RSP in 1992 and for the last 30 years has witnessed changing scenario starting from the trickling of women employees in various units to the present day when 115 lady executives and 691 lady non-executives are seen working in different parts of the unit handling important responsibilities and heading important Departments both in works as well as non-works areas.

Two decades later Sangeeta Pushpa Minz, Manager (Blast Furnaces) joined RSP in 2014, with grit and commitment she proved her worth by helping the Department win several awards and accolades and contributing immensely on the shop floor as well as in the planning section.   In her words, “When you are truly focused, then strength and confidence come from within to overcome any situation. From being the first girl working in a department known as one of the toughest areas, I accepted the challenge of doing a little extra. I did it, succeeded and I am satisfied by the way I progressed.”

Similar are the success stories of Nilima Tanty and Prema Bilung, the SSWs of Hot Strip Mill-1 who are successfully operating cranes to remove scale from Scale Treatment Pit with a sense of pride and satisfaction. In the same manner Sarini Singh and Damyanti Sahoo, the SSWs of Mechanical Shop have been operating the Lathe Machine and Drilling Machine which used to be the men’s domain all the while.

Several women centric programmes have been launched by RSP from time to time,  like Ojaswini, Veerangana and Durga as well as Gender Sensitization programmes like Samvedana that have helped in removing the mental blocks and creating an even playing field.

Not to forget the role of male counterparts who have played an equally vital role in supporting, giving space and encouragement to the women to realise their potential and make a difference. The success has come as a result of their hard work, perseverance, commitment and focus and the dream to excel which has been a propelling force.