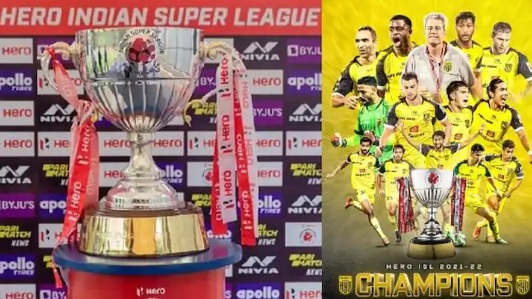 Laxmikant Kattimani saved three penalties as Hyderabad FC rose above the din with a 3-1 victory in a nerve-racking penalty shootout over Kerala Blasters FC and their sea of yellow supporters, in a rip-roaring 2021-22 Hero Indian Super League final at the packed PJN Stadium in Fatorda on Sunday.

Hyderabad FC became champions for the first time, vindicating Manolo Márquez’s vision of a well-rounded team with the perfect blend of youth and experience, but it took a lottery to decide the winners in an evenly-contested summit clash that ended 1-1 after extra time as the two teams could not be separated in 90 minutes.

Rahul KP (68th) opened the scoring for Kerala, Kattimani failing to get his hands to a long-ranger before Sahil Tavora (88th) scored a stunning goal to equalise and take the game to extra time. After the outfits cancelled eachother out over 30 minutes, it had to be a shootout to decide the champions.

Marko Leskovic, Nishu Kumar and Jeakson Singh saw their efforts saved brilliantly by Kattimani, the 32-year old veteran goalkeeper even saving twice from Nishu after his first was ruled out due to him stepping out of his line. For Hyderabad, skipper Joao Victor, Khassa Camara and Halicharan Narzary found the back of the net as Javier Siverio shot over the bar. Ayush Adhikari scored Kerala’s only goal from the spot.

It was heartbreak for Kerala as they reached the final for the third time, only to finish second best when it mattered the most. The thousands of Kerala fans, many of whom travelled all the way from home by road, were left high and dry as their team fell at the last hurdle after displaying a spirited performance.

Kerala, missing Sahal Abdul Samad to injury, started the brighter side from the first minute and it remained so throughout the first half barring a Siverio effort at the cusp of halftime.

Jorge Diaz could have helped Kerala take an early lead but the Argentine forward could not connect well to a Harmanjot Khabra floater inside the area that caught Asish Rai napping.

Diaz looked in fine form as he ran Hyderabad defence ragged and made those off-the-ball runs that kept the opposition defence on tenterhooks. At the half-hour mark, Luna tried his trademark dipping effort but the ball was collected with ease by Laxmikant Kattimani in Hyderabad’s goal.

The game got off to a lively start with Kerala dominating proceedings but the tempo tapered off a bit after the initial exchanges with both teams not really showing teeth upfront. Kerala were successful in keeping Ogbeche quiet but the likes of Luna and Vazquez too struggled to really burst to life.

Hyderabad were dealt a blow when Joel Chianese had to be replaced by Javier Siverio as the former picked up an injury in the 39th minute, and almost immediately Vazquez found the woodwork after Luna put in a delightful ball inside the box for Khabra to chest it down and Vazquez charging in to have a crack at goal first time. The missile of a strike cannoned off the crossbar as Hyderabad heaved a sigh of relief.

Just before halftime, Siverio forced Prabhsukhan Gill to make a brilliant save after the Spaniard got on the end of a Yasir Mohammad free-kick only for his header to be turned away at the near post.

Hyderabad FC came out all guns blazing in the second period, Joao Victor forcing Gil into a diving save from distance and Ogbeche firing over the bar after bursting through on goal with a deft first touch. Against the run of play, Kerala took the lead.

Vazquez found Rahul in the final third, the latter sprinting towards goal with Hyderabad defenders guilty of not closing him down. Rahul then tried his luck from distance and Kattimani should have done better, getting a feeble hand to the ball but failing to keep it out of goal.

Gill then kept his side in the driver’s seat with a brilliant save from a Ogbeche free-kick but Hyderabad’s constant forays bore fruit two minutes from full time, Tavora scoring a screamer after another substitute Halicharan Narzary’s delectable ball inside the box was cleared by the Kerala defence.

In extra time, Ogbeche’s overhead kick went just wide in the first half while the Nigerian’s effort was cleared off the line in the second essay by Marko Leskovic. Kerala coach Ivan Vukomanovic replaced Vazquez with Vincy Barretto, raising a few eyebrows but it looked it the Spaniard had picked up a knock.

2022-03-20
admin
Previous: Bharat Bhagya Vidhata: Grand show at Red Fort to kick off on March 25
Next: Urgent governance on groundwater extraction in India need of the hour: WaterAid India