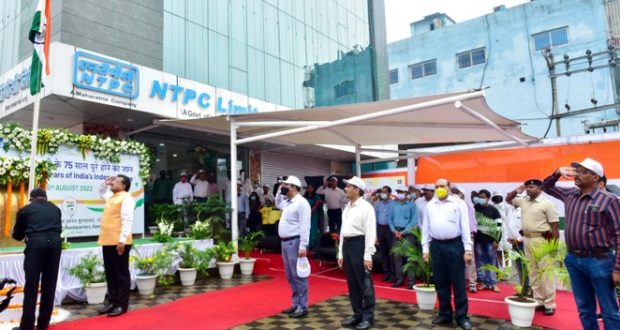 Chief Guest for the occasion, Partha Mazumder, Regional Executive Director (Coal Mining), remembered and paid homage to the freedom fighters who contributed to India’s independence. He also mentioned that the Prime Minister spearheaded the “Har Ghar Tiranga” initiative under the aegis of “Azadi ka Amrit Mahotsav” to commemorate 75 years of Indian independence. He appreciated the efforts of employees for their active participation in the “Har Ghar Tiranga” campaign.

In view of the rising demand in electricity across the country, Mazumder urged the Coal Mining Team to share the responsibility for partly meeting the coal demand of NTPC thermal stations. In FY 2021-22, the three operational coal mines: Pakri Barwadih (in Jharkhand), Dulanga (in Odisha) and Talaipalli (in Chhattisgarh), had produced 14 million tonnes of coal registering a growth of 27% over FY 2020-21. In the current fiscal, till July ’22, coal production of 6 million tonnes has been achieved recording a growth of 68% as compared to the same period in last year.

The coal production from Chatti Bariatu coal mine (in Jharkhand), South Pit Extension and West Pit of Talaipalli is expected to start in the coming days, informed the Regional Executive Director (Coal Mining), while adding that NTPC Coal Mining is determined and putting its best effort to achieve the target of 28 million tonnes in the current fiscal to reduce the dependency on external sources to some extent.

Mazumder congratulated the coal mining family for achieving the MoU targets till July’22, all under excellent category, and for achieving 5-star rating (the highest star rating) for Dulanga & Talaipalli and 4-star for Pakri-Barwadih, declared recently by Ministry of Coal. He also lauded the efforts being taken to ensure sustainability of operations.

He expressed his sincere thanks to Coal Mining Headquarters and project teams, seniors and peers in NTPC, Ministry of Power, Ministry of Coal, and other Government of India Ministries, State Government of Jharkhand, Odisha, Chhattisgarh, and all the stakeholders and the associates for their support.

In the felicitation ceremony, awards were presented to seven employees of Coal Mining Headquarters for their outstanding contributions. Besides, prizes were also distributed to the winners of various competitions held during Swachhta Pakhwada.