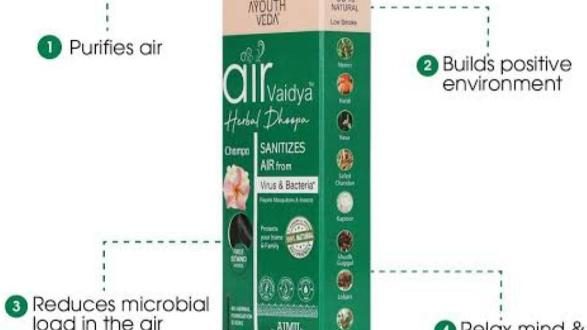 At a time when the whole world is grappling with highly transmissible Omicron variant of Covid-19, scientists at Banaras Hindu University (BHU) — in a first-of-its-kind study — have found that anti-viral, anti-bacterial, and anti-inflammatory properties in the fumes of Air Vaidya Herbal Dhoopa (AVHD), an ayurvedic formulation, could be effective in preventing air-borne infections in humans and home settings.

Dr. KRC Reddy, Professor, Department of Rasa Shastra (Ayurveda), Institute of Medical Sciences, BHU, who led the research, said, “Dhoopan (fumigation), a medicinal therapy, has been described in Ayurveda compendia for ages. Being potent in anti-microbial, anti-fungal, anti-viral action and given rising Covid-19 cases, this is the first scientific study.”

Since the Covid-19 virus generally enters through nose and mouth into the human body, medicinal fumigation therapy was given to the participants of intervention group. They were asked to inhale ‘Air Vaidya Herbal Dhoopa’ (AVHD) fumes for ten minutes twice a day, while the control group was not given such treatment.

“The results were encouraging. Just 4 percent of the intervention group on the medicinal therapy showed Covid like symptoms such as fever, cough, cold, or no taste or smell; on the other hand, at least 37 percent, who were not given such therapy, were found to have Covid-19 like symptoms,” said Dr. Reddy. The fumes were also chemically safe on Drosophila flies in the first phase of the clinical trial, Dr. Reddy added.

The research was conducted with the help of Delhi-based AIMIL Pharmaceuticals.

Dr. Sanchit Sharma, Executive Director of AIMIL Pharmaceuticals, said that “the herbal dhoop contains medicinal ingredients like Ushir, Guggal sudh, Nagarmotha, Mehendi, Jigat and Ghee — possessing therapeutic effects that may prevent the entry of coronavirus into the human body system by enhancing the immunity and thus reduces the inflammation caused by virus and bacteria.”

‘Air Vaidya’ has been launched in the market under the personal care brand Ayouthveda to help people reprieve from Covid-19 infection, he added.

The BHU scientists, who have now completed the second phase of the clinical trial of ‘Air Vaidya Herbal Dhoopa’ (AVHD), also said that it is beneficial in disinfecting home and office surroundings in the backdrop of the pandemic.