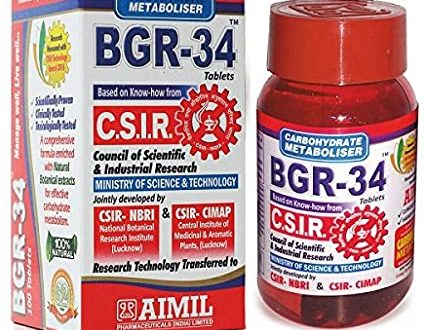 Researchers have found that ayurveda drug BGR-34 can help lower the sugar level within 12 weeks as well as exert a powerful anti-oxidant action to prevent diabetic complications.

Published in the latest edition of Serbian Journal of Experimental and Clinical Research on Sciendo scientific platform, the study by researchers from Chitkara University in Punjab suggests that the ayurvedic drug BGR-34 is more effective for the diabetes treatment, better in efficacy, reliability and affordability with little or no adverse effects.

Led by researcher Ravinder Singh, the team had conducted Phase IV clinical trials for 12 weeks on 100 diabetic patients which were divided into two groups.

Subjects from one of the groups were given allopathic drug, Sitagliptin while other group was given ayurveda drug, BGR-34 without informing them about the medicines, in the double blind study.

The researchers found that glyclated haemoglobin (HbA1c) level in the diabetic patients who were given BGR-34 went down significantly from the baseline value 8.499 to 8.061 per cent in the fourth week, 6.56 per cent in eighth week and 6.27 per cent in 12th week.

Similarly, RBS test revealed that before taking the herbal drug, the sugar level on an average which was 250mg/dl declined to 114mg/dl in the 12th week at the same time, FBS sharply went down to 74 from 176 in the same duration.

“Based on these results, it can be simply concluded that BGR-34 is effective in reducing high blood sugar levels and is more potent and efficacious in decreasing the glycemic levels possibly by modulating the insulin release and strengthening the I-cell functional capacity,” says the study.

Developed by the scientists from CSIR’s labs — the National Botanical Research Institute (NBRI) and the Central Institute of Medicinal and Aromatic Plants (CIMAP), BGR-34 is being manufactured and marketed by Delhi-based AIMIL Pharmaceuticals.

Sanchit Sharma, Executive Director of AIMIL Pharmaceuticals, attributed BGR-34 efficacy to the presence of herbs like Vijyasar, Dharuharida, Gilo and Manjistha, besides phyto-constituents from a few other medicinal plants which are well-known for their anti-diabetic properties.

No doubt, the possible reason for better efficacy of BGR-34 could be due to its several nutritive phytoconstituents and antioxidants which protect β-cells from damage, promote the repair and regenerate, said the researchers.

India is known as the Diabetes Capital of the world with above 77 million adults suffering from the chronic disease. The number is expected to increase to 134 million by 2045. According to the World Health Organisation, diabetes is considered as one of the major causes of blindness, kidney failure, heart attack, stroke and lower-limb amputation.