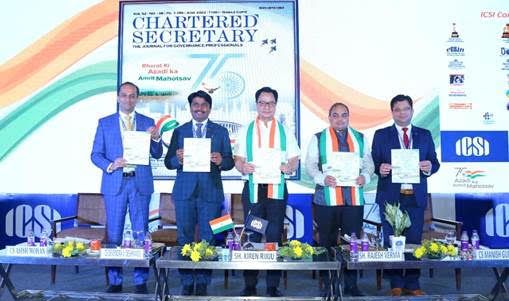 The Union Minister was speaking at a special programme under ‘Azadi ka Amrit Mahotsav’ by the Institute of Company Secretaries of India (ICSI) here.

“Though the company secretaries always remain in the background, they are the ones who make companies grow big, strengthen the economy and are the foundation of Atmanirbhar Bharat,” a release issued by ICSI quoted Rijiju as saying.

Rijiju also appreciated the efforts of the Institute in bringing the far-flung areas of North-East into the mainstream by going an extra mile and waiving fees for students from northeastern states of India.

Corporate Affairs Secretary Rajesh Verma said Company secretaries are the catalyst in promoting and upholding good governance in the country.

ICSI President Devendra V Deshpande said that the Institute is aspiring to become a think tank of Good Governance Practices and explore newer areas of service in the future.

Deshpande also mentioned the introduction of ICSI BRSR Awards for all companies who have taken up Business Responsibility and Sustainability Reporting.