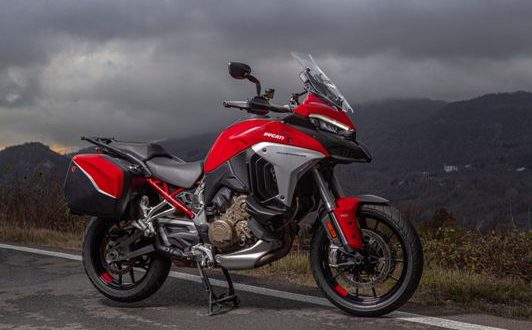 The Multistrada V4 is an all-new motorcycle from the ground up that will headline Ducati’s family of adventure tourer bikes in both capability and technology prowess.

This 4th generation of Multistrada represents the best of Ducati’s technology, performance, and capability. The name also serves a strong purpose, where “multi” stands for “many” so “Multi-Strada” means “many roads”, thus, falling in line with the bike’s sheer ability to dominate all roads with ease, thanks to its new V4 Granturismo engine, integrated safety and balanced chassis.

Now, with this all-new generation, Ducati has also reimagined this iconic do-it-all machine. The biggest change starts with the heart of the project, its powerful engine called the V4 Granturismo, tuned for all terrain performance, and derived from the highly acclaimed Desmosedici Stradale which does duty on the Panigale V4 and the Streetfighter V4. The all new V4 Granturismo engine guarantees extremely smooth operation at low revs and a linear torque curve as well. So, riders will be able to conquer more technical, and difficult terrains with an engine that delivers more power in an effortless manner giving rider more control, and confidence to rule all roads.

The Multistrada is a one-of-a-kind motorcycle that not only combines the pleasure of on-asphalt sporty riding, but also gives overall satisfaction and easy off-road handling together with unprecedented comfort on longer journeys and in everyday use.

“The Multistrada V4 is a state-of-the-art technological marvel, which can take you across the globe with ease. The new Granturismo V4 engine is specifically designed keeping touring and off-road riding in mind and it is the heart of this whole project. I am thrilled not just for the Ducatisti but also for this segment as the Multistrada V4 ushers in, with performance, design and technology that will make any enthusiast weak in his/her knees! I look forward to seeing it in India, especially on the roads less taken,” said Bipul Chandra, Managing Director, Ducati India.

Both the Multistrada V4 and V4 S boast of the V4 Granturismo engine, V4 – 90°, counter-rotating crankshaft, Twin Pulse firing order, which puts out 170 Hp at 10, 500 rpm and 125 Nm of torque at 8,750 rpm. This liquid-cooled engine has four valves per cylinder and bore and stroke measurements of 83 and 53.5 mm, respectively.

The Multistrada V4 and V4 S engine has a maintenance interval of 15,000 km, with valve clearance inspection at every 60,000 km, which is the longest main service interval in the industry.

The V4 Granturismo engine has been designed for road and off-road use and it also exploits, when needed, all the technical benefits that Ducati has developed over years of experience in the world of competition. Among these, the counter-rotating crankshaft, which by working “against” the inertia generated by the wheels, enhances handling, reduces pitching, and consequently improves efficiency and riding pleasure even on the road.

In addition, Ducati engineers also concentrated on the gear ratio, with a short first gear excellent for maneuvering at extremely low speeds, uphill starts even when fully loaded and off-road sections. The sixth gear, as a result is tall and ideal to tackle lengthy motorway travel. Furthermore, the Multistrada V4 also gets rear engine bank deactivation. In doing so, when the bike is stopped at the traffic lights and is in idle with neutral engaged, the rear bank is deactivated (there is no combustion in the cylinders), improving the thermal comfort of the rider and passenger.

The Ducati Multistrada V4 is the first production bike in the world to adopt radar technology. Radars are advanced aid systems capable of supporting and making riding more comfortable thanks to the ability to reconstruct the reality surrounding the motorcycle. This technical solution manages two functions: Adaptive Cruise Control and Blind Spot Detection.

The Multistrada V4 is fitted with a 5” color TFT display with optimal resolution and perfect readability in any light conditions. The easy-to-read graphics feature a round digital tachometer which displays gear number and further useful information, such as fuel gauge, temperature, and engine temperature while the panels display the levels of the electronic controls and other information.

On the electronics front, the Multistrada V4 represents the top of the line in the motorcycle segment, which is true in terms of safety, comfort, performance, and connectivity features. The inertial platform (IMU) manages the operation of Cornering ABS, Ducati Wheelie Control (DWC) with eight setting levels, Cornering Ducati Traction Control (DTC).

The Multistrada V4 features twin Ø320 mm brake discs at the front, with Brembo M4.32 front calipers while the Multistrada V4 S is equipped with Ø330 mm brake discs, along with Brembo Stylema calipers. Both versions come with 19” wheels (120/70 Pirelli Scorpion Trail tyres) at the front and 17” wheels (170/60 Pirelli Scorpion Trail tyres) at the back, with the Multistrada V4 S getting an option for Spoked Wheels, straight from the factory. The spoked wheels version will come to India later this year.