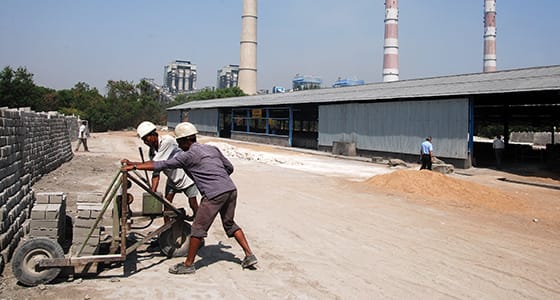 Fly ash utilization: A plethora of opportunities towards a sustainable future

India produces an estimated 226 million tons of fly ash annually, out of which about 188 million tons is being utilized. This results in close to 40 million tons of fly ash being stored in ash dykes or simply dumped in open area, without proper guidelines, posing a serious threat to the environment. Utilization of fly ash has attained huge importance as its production has been consistently increasing with escalating demand of power.

Regardless of whether it’s an individual we are talking about or the Government – electricity is essential for all. Though Renewable Energy is gaining strong relevance for the progress of the environment, coal-based power generation still forms the backbone for grid stability in the Indian context and ash is an inherent part of the coal. The fly ash produced by thermal power stations contains low unburnt carbon and has high pozzolanic activity conforming to the relevant Indian standards. It is ideal for manufacturing cement, concrete, concrete products, cellular concrete products, bricks, blocks and tiles. Therefore, instead of using fertile topsoil, we need to push the use of fly ash in all such products.

Thermal power plants across India generate large quantities of fly ash with coal produced in India generating up to 30 to 45% ash when fired in boilers. Thanks to the intervention of Government along with efforts of power generating companies, fly ash is presently utilised in the manufacturing of Portland Pozzolana Cement (PPC) (25%), Manufacturing of fly ash bricks (10%) and reclamation of low lying areas (15%). Fly ash is also being used for road construction (10%) and ash dyke construction (10%).

It will change the mindset of the sceptics and they will realise that ash is not an environmental hazard but one of the few saviours of Mother Earth. It is high time to consider ash as a power plant by-product instead of a waste material that needs disposal.

Though road construction projects are utilizing ash for road and flyover embankments, cost for transportation of the fly ash is borne by thermal power plants. The power plants pass on this cost to the consumers of electricity and therefore, the latter has to bear the burden of this expense. Sometimes this leads to an anomaly as the cost is borne by beneficiaries of one state while road infrastructure is being developed in another state. To resolve the anomaly, the focus should be on incurring the cost of ash transportation from the cost of road construction with usage of ash being made mandatory to conserve the top soil layer. Thermal power plants can be asked to prioritize the free supply of ash to road construction companies. Further, the road infrastructure in the vicinity of remotely located power plants needs to be improved for transportation of ash by road.

Mining companies, sending coal loaded with ash are reluctant to even accept ash for backfilling in operating/abandoned mine voids despite the mandate in MoEF& CC Gazette notification. Coal companies must be also made responsible for utilizing ash, supplied by them under Extended Producer Liability.

The utilization of ash/ash brick/other ash products should be made mandatory for PWD, National Highways Authority of India, Cement Industries, Realty Sector by the Ministry of Environment, Forest and Climate Change and the Government of India. These sectors should also bear the transportation costs. Thermal power plants should facilitate the lifting of ash from their power plants. It will not only boost ash utilization but also spare electricity consumers from having to shell out money for these additional costs.

A monitoring mechanism needs to be in place for its compliance. For effective distribution of ash, the government can encourage companies having distribution setups across the country and involved in infrastructure development like Steel & Cement to set up large Ash Silos near cities and sell ash on commercial terms. Railway network augmentation can be done as necessary to transport ash from power plants to these large storage facilities. Long-distance ash transportation through Inland waterways and export of ash through sea route may also be considered.