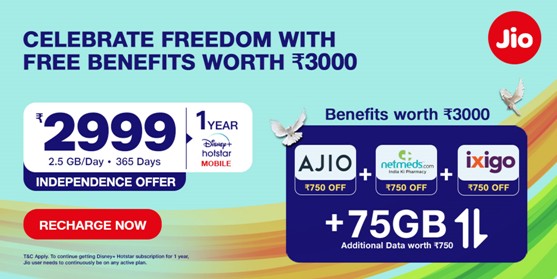 Jio also announced a number of other offers ahead of Independence Day for JioFiber users and annual recharging customers.

Under the “Har Ghar Tiranga Har Ghar JioFiber” offer, Reliance Jio will be offering users zero entry cost when getting a new JioFiber connection. The offer will be valid between August 12 and August 16, and users who get a new JioFiber connection between these dates will have to pay no extra costs for the internet box and set-top box. Users will also get an extra 15 days of benefits on choosing the Entertainment Bonanza 6 or 12 month plan.

Jio has also announced a new annual Independence Day plan priced at Rs 2,999. The plan offered users 2.5GB daily data for 365 days. The plan also includes unlimited calling and 100 SMS per day, and Jio claims users will also get free bundled benefits worth Rs 3,000. This includes a subscription to Disney+ Hotstar Mobile worth Rs 499 and other Jio-services like JioTV, JioSecurity, JioCloud and JioCinema.