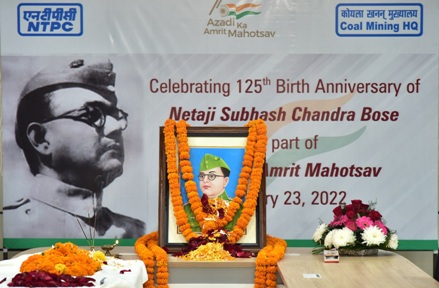 The day is celebrated as ‘Parakram Diwas’ (day of valour).

The program began with the garlanding of the portrait of Subhash Chandra Bose by Chief Guest Amit Kumar Dubey, General Manager (Safety), in presence of Alois Topno, General Manager(HR) followed by flower tributes by the senior officials and employees of  NTPC Coal Mining Headquarters

On the occasion, Dubey read out the message of Regional Executive Director (Coal Mining), Partha Mazumder. The message stated that a series of events were being planned at NTPC Coal Mining Headquarters and coal mining projects during the weeklong celebration of the 125th birth anniversary of “Netaji” under the aegis of ‘Azadi Ka Amrit Mahastov’. It is very encouraging to see large participation by employees and family members including children in the program.

“Netaji’s sacrifice and dedication towards the freedom of the country is unparallel, and he was a bright student who even qualified for Indian Civil Services but decided that his true calling was to serve the motherland and its countrymen. Netaji came back to India from foreign and dedicated his whole life to India’s freedom movement. He stood for truth, justice and freedom and one should emulate the same belief and values to become an ideal citizen of the nation,” Majumder’s message read.

As part of the celebration, competitions like online quiz on Netaji for children of coal mining projects, online Inter-school quiz competition, painting competition, elocution competition, and street play, naming of Children’s Park and office building and weeklong creative workshop by  Swayamsiddha Ladies Club would be organized.