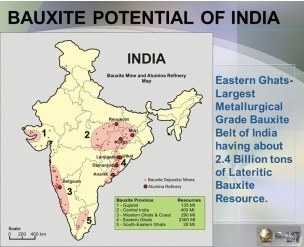 Aluminium and its alloys are being increasingly used right from domestic appliances, electrical conductors in transmission lines, to building and construction, automobile, defence, aerospace industry as well as myriad other critical applications. It has significant strategic implications in realizing the dream of Atmanirbhar Bharat and India’s vision to become a USD 5 trillion economy. Bauxite has no substitute; and being the only ore used for aluminium production, availability of bauxite plays an important role in growth and development of the aluminium industry.

Shortage of metallurgical grade bauxite in India was a concern up to 1970s for which extensive exploration was taken up by the Government of India which led to the discovery of bauxite along the east coast of India. With that, India suddenly became an important destination with prospects for growth and development of the domestic aluminium industry.

For the domestic Aluminium industry to reach its full potential and become self-reliant to meet India’s increasing consumption, it will need a fresh investment of approximately Rs.2.4 lakh crore. Consumption of aluminium in India is expected to double over the next 5 years resulting in significant forex earnings for the country through the export of aluminium value-added products. In addition, the aluminium industry is also likely to create an additional 10,000 SMEs and 24 lakh jobs in the downstream sector.

However, despite all available resources and a thriving marketplace, the lack of progress on successful bauxite mine auctions is greatly hindering India’s opportunity to become a global manufacturing powerhouse.

It is crucial to note that despite India’s abundant bauxite reserves of almost 4 billion tonnes, the country needs to import bauxite to meet its aluminium production requirements. It is extremely disheartening to see that one of India’s most abundant ores, the fifth largest reserves in the world, has caused an estimated forex loss of over 400 million US dollars in the last 5 years alone. And this forex loss will continue unabated unless India successfully auctions bauxite mine leases and increases production of existing mines by at least 50 per cent.

Once this potential to exponentially enhance bauxite production in the country is utilized, unnecessary bauxite imports will be curbed, rendering the domestic aluminium production competitive and enhancing local employment. Case in point, the opening of a single bauxite mine has the potential to generate over 10,000 livelihood opportunities and can generate over Rs. 5,000 crore worth of revenue for the state.

It is alarming to see that over the last 5 years, despite the steady rise in demand and consumption of Aluminium, there has been no successful auction of any Metallurgical Grade Bauxite Mine, since inception of the MMDR Act 2015. The unviable method of determination of Average Sale Price (ASP) of Metallurgical Grade Bauxite that is calculated from the selling price of the end product i.e., Aluminium, is a big factor in the bauxite mines not being auctioned successfully. The author is of opinion that due care must be taken while calculating the Average Sale Price (ASP). In fact, ASP of any mineral should be calculated on cost incurred on mine-gate basis. Unfortunately, the current method includes costs beyond ex-mine expenditures such as logistics, transportation, loading, unloading, rent for the stocking yard, charges for sampling and analysis etc resulting in a grossly inflated cost of over 300 per cent to 400 per cent.

This pricing abnormality has prevented the successful auction of bauxite mines by various state governments as the present system of Bauxite ASP calculation makes the production of Aluminium unviable in the country. Because of this, new investments of over Rs. 50,000 crore in Aluminium sector have also been put on hold as it shall be futile in the current Bauxite ASP structure.

For India to achieve its manufacturing vision, a multi-fold growth in bauxite production from current 20-22 million tonnes to 48 million tonnes per year is required to meet the growing domestic requirement. The catalyzer in this growth trajectory will be how India taps its vast deposits of bauxite. Despite one of the world’s largest deposits, the possible key to fast-track India’s development is being ignored, as bauxite mining is yet to be prioritized.

Bauxite Mining activities have a multiplier effect on livelihood opportunities in the remote and impoverished regions of the country which otherwise have limited potential for other economic activities. Given the present employment crisis in the country, the sector could be the key to bringing transformational change and employment avenues in various districts of the country that are witnessing migrants returning to their home states, while ensuring India becomes a global manufacturing powerhouse.

(The author is a Geologist, and Ex-Advisor, Ministry of Mines, Govt. of India)