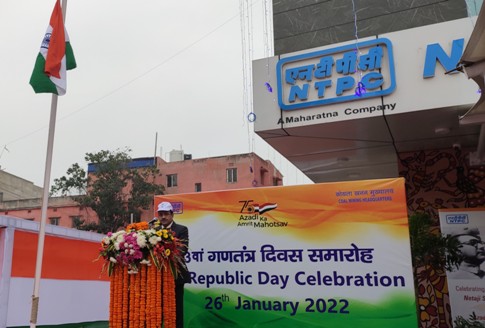 Speaking on the occasion, Majumder said, “NTPC, country’s largest and responsible power company, has ensured its best effort to meet the power requirement of the country while continuing to fight the pandemic, so that essential services like hospitals get the power supply and economic activities go on.” “As part of the thermal generation business, NTPC Coal Mining is playing a significant role to support our core business of power generation by supplying quality fuel at a competitive price to its power stations,” he added.

Sharing some of the key achievements of Coal Mining Projects and Coal Mining Headquarters, the Regional Executive Director congratulated all for achieving total coal production of 10.7 MMT till date which is 106% with respect to pro-rata target of 10.17 MMT and against the last year’s production of 8.15 MMT during the corresponding period.

Mazumder urged all employees of CMHQ to put their best effort and to extend their full support to the coal mining projects so that targets can be achieved.

He also congratulated the Talaipalli team for achieving the Safety Award from DGMS. He appreciated Team SSC(C&M) CMHQ for procurement of total of about Rs. 50 crore through Govt E-Procurement (GEM) portal, out of which Rs. 28 crore was done in the current Financial Year.

He informed that a Consultant of global repute has been engaged for exploring and identifying prospective coal block acquisition across the globe. He said that efforts are being taken for construction of Loading bulb and associated Railway track for evacuation of coal from Chatti-Bariatu and Kerandari coal blocks etc. in association with JRIDCL, GoJH which will be cost effective for NTPC.

RED (Coal Mining) reiterated that digitalization and automation are the key drivers for improving business efficiency, speed, transparency, and efficacy. In this regard, he mentioned about some key digitalization initiatives taken by CMHQ like, implementation of e-Safety management plan which was praised by High Level Expert Committee on Safety of Ministry of Coal, start of digitalization of Statutory documents of CMHQ and all coal mining projects and establishment of Mining Operational Efficiency Improvement Cell at CMHQ. Initiatives are also being taken for implementation of e-Suraksha App in coal mining.

For encouraging the children and family members of CMHQ employees who have demonstrated their exemplary work in various fields, merit certificates were presented by the RED (Coal Mining) on this occasion.

2022-01-27
admin
Previous: ISL: Spotlight on Chima as Jamshedpur look to stretch purple patch against Goa
Next: Maharaja’s homecoming: Air India back with the Tatas