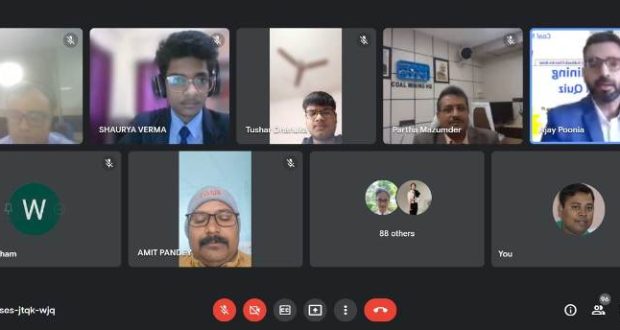 The focus of this quiz competition was on Netaji and the Indian Freedom Movement.

In his address, Mazumder stated that Netaji Subhash Chandra Bose was an icon of the Indian Freedom Movement and was an apostle of dedication, hard work, truth and sacrifice. He urged the students to follow his ideals. He appreciated the initiative of Coal Mining Headquarters for organizing this event on such a large scale, in which as many as 96 school students took part. While wishing the students the very best, he said that this Quiz competition on Netaji and Indian Freedom Movement would definitely be a memorable and illuminating one for the inquisitive and inquiring minds of these participating school students from in and around Ranchi. He declared that this NTPC Coal Mining Inter School Quiz Competition will be an annual event for the school students from Ranchi.

Mahua Mazumder, President, Swayamsiddha Ladies Club, NTPC Coal Mining Headquarters, Ranchi, while thanking all the participating students during the valedictory session, praised the Quiz Master and the organizers of this event for conducting it so professionally. She also shared that this kind of event is the best and interesting way of sharing knowledge about the Indian freedom movement and will go a long way in inculcating values and ideals demonstrated by the icons of our freedom movement among the students.

The senior teachers and representatives of the schools who were witnessing the Quiz, highly appreciated the whole thought and initiative by NTPC Coal Mining Headquarters and yearned for more such kind of programs by NTPC for students.