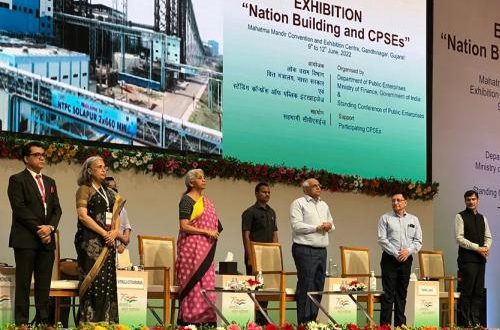 DPE, with support of CPSEs and SCOPE, is organizing a number of events under ‘Azadi Ka Amrit Mahotsav’ to commemorate the 75 years of India’s independence. As part of this, one of the major events is an exhibition on ‘Nation Building and CPSEs’, where 75 CPSEs including SAIL áre participating, and they will showcase their contribution in building today’s India. The exhibition was inaugurated by Gujarat Chief Minister Bhupendrabhai Patel and Union Finance Minister Nirmala Sitharaman. SAIL Chairman Soma Mondal was also present during the occasion.

SAIL has put up a stall in the exhibition where it has displayed the Company’s contribution in nation building since its inception. In the stall put up by SAIL, the Company has also talked about its diverse product range, catering to various significant sectors of the economy. SAIL is actively participating in the ‘Jan Andolan’ of commemorating AKAM and is committed to make the initiative a success.