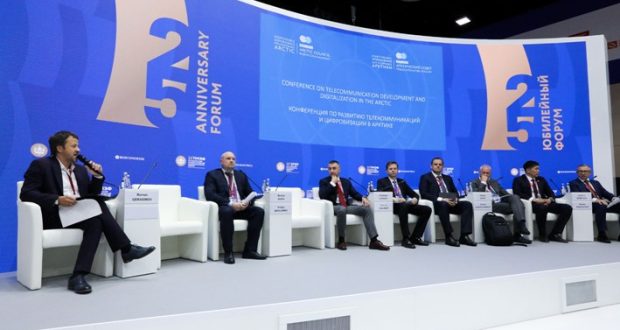 Participants of the Conference on Telecommunication Development and Digitalization in the Arctic discussed the implementation of digital technologies in the Arctic at the St. Petersburg International Economic Forum (SPIEF). The event was held as part of the plan for the main events of the Russian Federation’s chairmanship of the Arctic Council in 2021–2023, with the Roscongress Foundation acting as operator.

“The main priority of Russia’s chairmanship of the Arctic Council and our programme is the sustainable development of the Arctic region, which involves the development of telecommunications as a factor capable of improving quality of life, well-being, and prosperity. It will also make public services, remote medicine, and healthcare more accessible,”Ambassador-at-Large of the Russian Ministry of Foreign Affairs and Chairman of the Arctic Senior Officials Nikolay Korchunov said.

He stressed that Russia’s Arctic zone neededhigh-quality communication infrastructure and high-speed internet, and the Northern Sea Route needed to be digitalized. “The task of providing the Arctic withreliable communications network is not straightforward: the distances that must be covered are huge. Public-private partnerships and the principles of corporate responsibility are also a must,”Korchunov said.

According to Northern Sea Route Directorate of the State Atomic Energy Corporation Rosatom Deputy Director Maxim Kulinko, the digitalization of the Northern Sea Route is a matter of state technological sovereignty. It is currently underway: RUB 3.8 billion from the budget and RUB 1.4 billion of extra-budgetary funds were secured in 2021. “We are working actively at present, funding has been secured and fully synchronised across all processes,”Kulinko said.

The conference was also attended by Andrey Kuropyatnikov, Chief Executive Officer, Morsviazsputnik, and Alexander Loginov, Vice President, Director of the Far Eastern Macroregional Branch, Rostelecom, who spoke about building telecommunications infrastructure; Anatoly Semenov, Minister of Innovations, Digital Development and Communication Technologies of the Republic of Sakha (Yakutia), who spoke about the success of the digitalization process in the region; and Sergey Sergushev, Deputy General Director for Logistics, Russian Post,who spoke about a project to introduce unmanned aerial cargo delivery to the Arctic region.

Digitalization is one of the most important priorities for development in Russia’s Arctic zone until 2035. Digital technology will provide jobs to residents of the Arctic and reduce the outflow of people from the region. In turn, telemedicine projects promise to modernize primary healthcare in the remote regions of the Arctic zone.

Priorities of the Russian Federation’s chairmanship of the Arctic Council in 2021–2023 include sustainable development of the Arctic and prosperity and progress for the people of the North, including indigenous peoples. In the context of support for the indigenous peoples of the Arctic, Russia intends to promote projects and initiatives for the digitalization of remote Arctic settlements and reindeer herding farms by improving the reliability and efficiency of satellite navigation systems in the Arctic. Furthermore, access to education in remote areas is vital to ensuring sustainable development and improving the quality and standard of life in the Arctic.