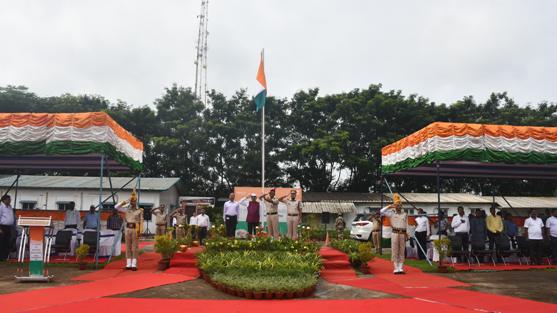 On the occasion, CL Karnsaid, “Let’s salute the nation on its 76th Independence Day. Let us also salute the martyrs and the leaders who shaped the Nation in the last 75 years with their tireless efforts”.

“Tata Steel is the pioneering brand that played a significant role in building the infrastructure of modern India. This is also an opportunity for all of us to pay homage to the real nation builders who played a crucial role in building the India we live in. At Tata Steel, as we firmly believe that freedom is the power to change and bring positive results and we are committed towards our effort for the growth and prosperity of the nation,” he added.

During the celebration, the dignitaries were spell-bound with the parade and drill showcased by the CISF team. The ceremony concluded with the felicitation of the security and fire safety personnel for their exemplary performance.

As part of ‘Har Ghar Tiranga’ campaign under the aegis of ‘Azadi ka Amrit Mahotsav’, National Flags were displayed in every Department of Tata Steel Kalinganagar from August 13, 2022.

As part of ‘Azadi Ka Amrit Mahotsav’ campaign, a mass plantation drive was organised at Tata Steel Kalinganagar in July this year during which more than 1200 saplings were planted across the steel plant.