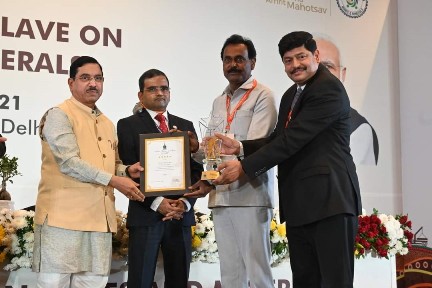 The Noamundi Iron Mine (NIM) of Tata Steel has been accorded the ‘Five Star rating’ for sustainable development for three consecutive years i.e. 2017-18, 2018-19 and 2019-20. The award ceremony was organised today during the 5th National Conclave on Mines & Minerals in New Delhi.

Expressing happiness on receiving the award, D B Sundara Ramam said, “Sustainability is not new to Tata Steel. It is seeded in our principles and values. Sustainable mining demands the judicious use of technology at each stage of the mine’s life. Our current focus is on digitalization and smart solutions aimed at creating sustainable future for our stakeholders. This award is a testimony to our sustainable mining practices and it further reinforces our commitment towards sustainable development.”

Tata Steel`s operating philosophy is deep-rooted in its principles of zero harm, resource efficiency, circular economy, minimizing its ecological footprint, and care for the community and workforce.  With sustainability as a cornerstone of its operations, the Noamundi Iron Mine has taken several initiatives in and around the region with respect to energy conservation and reducing carbon footprint including rainwater harvesting, plantation in and around Noamundi, setting up a 3 MW Solar Power Plant to reduce the carbon footprint and generate power in a sustainable manner, to name a few.

The Ministry of Mines had launched the scheme of ‘Star Rating of Mines’ for awarding the mining lease owners in 2016 for their efforts and initiatives for implementation of the Sustainable Development Framework (SDF). One to five Stars are awarded to mines based on the provisions stipulated, with the best performing leases being given Five Stars. The mining lease holders with Five Star rating for the last three years were felicitated in the conclave to encourage sustainable mining.