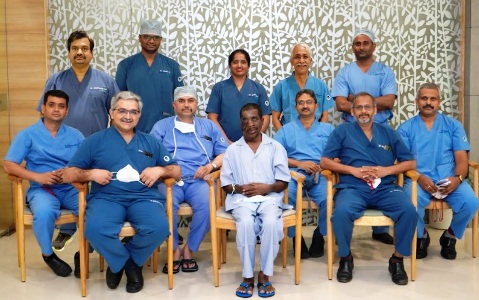 For 31-year-old Manbodh Bagh from Titilagarh, Odisha, life was not easy as he had been suffering from a rare condition, plexiform neurofibroma, a benign tumor of the peripheral nerves since childhood. As a result of this condition, he developed a tumor on his face, and it grew as he aged. The tumor was massive, weighing 8+kg and was a bulky mass drooping from the right side of his face. He faced humiliation from several people due to his looks and had visited multiple hospitals earlier for partial resection of the tumor. However, he was denied surgery as his chance of survival was bleak if they had gone ahead with his surgery due to the risk of torrential bleeding. At a major hospital in Odisha, his case was reviewed, surgery was attempted and was later abandoned due to uncontrolled bleeding.

Manbodh’s condition became his source of misery and he desperately wanted to get rid of it. His hope soon arrived in the form of few well-wishers, the Newslions Media Network Pvt Ltd facilitated the treatment along with Milaap through a crowd funding effort to provide him this life-changing surgery of multiple sittings. Post this, he visited Aster CMI Hospital in Bangalore for treatment where his condition was evaluated carefully, and his case subsequently accepted.

The huge tumor was on the right side of face, head and neck, and infiltrating into the right orbit and completely engulfing the right eye. This made the surgical removal difficult and risky.

Speaking about the complications involved in Manbodh’s surgery, Dr. Ravi Gopal Varma, Lead Consultant – Neurosurgery & Chief of Neurosciences, Aster CMI Hospital said: “Manbodh came to us with a prodigious tumor extending from his head till the neck. After undergoing unsuccessful debulking surgeries, his tumor was deemed inoperable. His CT scan also showed his facial bones were destroyed by the tumor. Dealing with such a highly complex cases often requires different modalities of treatment and a multi-disciplinary approach. So, the team carefully evaluated the case and provided a seamless approach to the treatment. During the surgery to minimize the bleeding, we planned for preop tumor  embolization. The DSA Angiogram showed a significant tumor blush supplied by multiple branches of facial artery, internal maxillary artery, superficial temporal artery and ophthalmic artery. Super selective catheterization of those multiple branches and tumor embolization was done using PVA Particles. The Final Angiogram showed a significant decrease in tumor blush which minimized the bleeding during surgery. The team  finally were able to remove the tumor and restore the facial bone which was made possible due to the highly skilled doctors at Aster CMI, backed by state-of-the-art infrastructure and world-class medical equipment required for safe and secure surgery.”

Dr. Sathish M S Vasishta, Consultant – Craniomaxillofacial Surgery, Aster CMI Hospital said: “The tumor involved his part of forehead, orbit, maxilla, Zygoma, and half of the lower jaw along with the involvement of right temporomandibular joint. Since the tumor had destroyed his facial bones, the challenge was to restore it after the removal of the tumor. With his CT scans data, a 3D printed skull model of his face was made to assess extent of the tumor and designed excision plan and reconstruction.”

Dr. Madhusudan G, Lead and Senior Consultant – Plastic Surgery, Aster CMI Hospital said, “Once the tumor was removed, we took Manbodh up for reconstruction surgery after 48 hours. Most of his facial skin had to be removed as the tumor was densely adherent, resulting in a large composite skin and soft tissue defect over the entire right half of the face. Reconstruction of such large defects which need microsurgical tissue transfer was challenging due to preoperative embolization. The entire reconstruction surgery was done in two stages by using three flaps skin and muscles of both his thighs as well as the right forearm.  In the first stage right thigh skin and muscles were transferred by microsurgical means and in the second stage, a rare complex reconstruction method was used by connecting left thigh skin- muscle flap to his right forearm skin and transfer the combination of two flaps to the face by attaching hand to the forehead for three weeks.”

Dr. Raghavendra Pai K, Lead Consultant – Neuroanaesthesia, Aster CMI Hospital said “Manbodh was weighing 58 kg with the tumor. On 1st Dec’2020, the day of the first resection, which lasted for 19 hours where he suffered torrential blood loss and was transfused nearly 40 litres of fluids, blood and blood components. We had reserved 12 units of blood for this surgery, which is huge by regular standards and were able to get additional 8 units of blood in a short span of time. Since his tumor was affecting his mouth opening it was a challenge to get his breathing tube into his trachea for his first surgery. After 3 days of stabilization in the ICU, he underwent the reconstruction surgery which lasted for an additional 23 hours. We also took care of him in our Neuro ICU. We were able to mobilize Manbodh on the 15th day in the ICU and shifted him to the wards on Day 18. He then weighed about 44kg. The successful management of complex surgeries like these are possible when we have dedicated and capable teams under the same roof.”

Newslions Media Network Pvt Ltd Director Pankaj said, “Once we came to know about Manbodh’s case from a local reporter, we decided to help him at any cost and reached out to Milaap Foundation. We went to Odisha to meet Manbodh in person. We discussed the entire treatment plan at Aster CMI Hospital and explained him about the crowdfunding. He came to Bangalore with us for the treatment. During the surgery, Manbodh suffered heavy blood loss. So, I along with my employees and friends came forward and donated blood for him. This was a wonderful experience and I feel that I have formed a blood relation with Manbodh.’’

Explaining his plight, Manbodh, said: “In the hope of getting the tumor removed, I had consulted various doctors and visited multiple hospitals but all in vain. I was hesitant and shy to go outdoors due to the tumor. My life had become miserable. Finally, I came to know about Aster CMI Hospital and consulted the doctors here. They assured me of the best treatment and removal of this tumor. Newslions Media Network Pvt Ltd and Milaap crowdfunding platform also came forward to support me. I am elated and no words are enough to express my joy. I am thankful to all the doctors at the hospital who have given me a second chance to live again.” Manbodh is now leading a happy tumor-free life and post treatment, he recovered speedily, was discharged from the hospital with no complications and went back to his hometown with a big smile on his face.

Aster DM Healthcare Limited is one of the largest private healthcare service providers operating in multiple GCC states and is an emerging healthcare player in India.