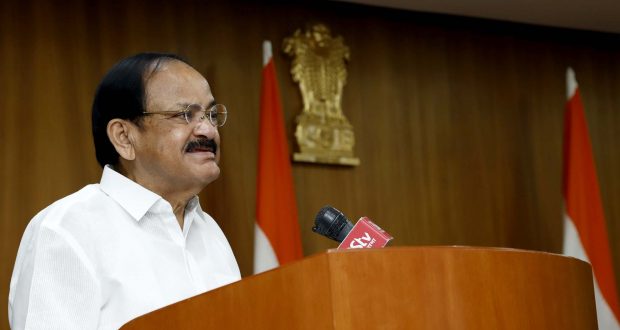 Vice President M. Venakaiah Naidu on Thursday called for an inclusive approach to online and distance education and cautioned that issues pertaining to access, quality and affordability might get accentuated with the pandemic and exclude many students in the process.

While noting the power of online education as a ‘digital bridge’ for people in remote areas, he stressed that care must be taken not to exclude students from socio-economically weaker sections and create a ‘digital divide’.

To improve the access and affordability of the internet, especially in rural areas, Shri Naidu underscored the need for expeditious implementation of projects such as Bharat Net. The Vice President wanted institutions that undertake CSR activities to prioritise providing electronic devices to school and college students from socially and economically weaker sections.

Naidu also noted the paucity of online courses in Indian languages and called upon private players in the educational technology sector to offer content in more regional languages. In this context, he recalled the tool developed by AICTE recently which translates English content online into 11 Indian languages and called for more such efforts. “Online education should not remain the privilege of the few, but rather become the ultimate tool for real democratisation of education in India”, he stressed.

Virtually addressing the first “Foundation Day” celebration of Central University of Andhra Pradesh, Ananthapuramu, the Vice President noted how higher education can be a great economic catalyst for the community, bring development to a region and even spur growth of the country. In this regard, he expressed hope that the Central University will accelerate the educational and economic development of the State and unlock the potential of the Rayalaseema region.

Noting the positive externalities of higher education, Naidu called for pushing towards more ‘internationalisation’ of the Indian universities. He gave the instance of top global universities which attract international talent every year and have been thriving as centres of excellence, delivering economic benefits to the host nation.

In order to achieve internationalisation of the universities, the Vice President stressed the need to promote diversity among faculty and students as also to collaborate proactively with reputed global universities. He suggested encouraging Indian universities to open global campuses, which will also improve the brand value of Indian education. “All these initiatives will generate enormous job opportunities, increase access to education in our country and act as growth accelerators for our economy”, he said.

Recalling that India was once known as “Vishwaguru” and attracted students from all corners of the world to renowned institutions such as Nalanda, Takshashila and Pushpagiri, the Vice President said, “We must regain that intellectual leadership and emerge as a global hub of learning and innovation again”.

Referring to the stress on multidisciplinary and holistic education in the National Education Policy (NEP) 2020, Naidu called for strengthening education in humanities and social sciences in all universities. In this regard, he advised universities to update students of all disciplines with the latest technological developments such as Artificial Intelligence and Big Data and not engineers alone.

Observing the change in pedagogy over the years, Naidu said the NEP is a visionary document that encourages hands-on activity and community engagement to ensure overall development of the child. He said students must be exposed to real-world problems through industry-institute linkages and added that solving problems was the only way for students to learn the principles of their fields of study. Similarly, he wanted universities to engage and work with local communities, utilising their area of expertise.

The Vice President complimented the Central University for adopting six villages under the Unnat Bharat Abhiyan and expressed confidence that the University will excel in producing well-rounded personalities.

Appreciating the state government’s efforts, Naidu advised that all states should speedily implement the provision of NEP. He stressed the need to allocate more funds for infrastructure and suggested all possible support should be given to universities.