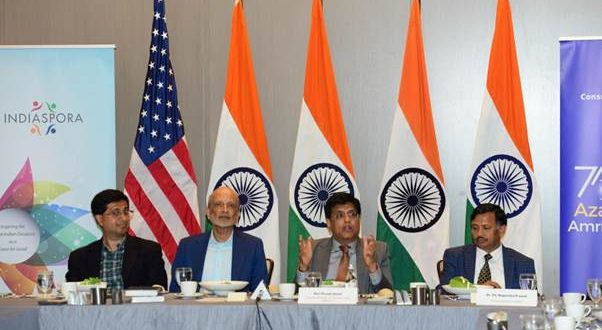 Union Minister for Commerce and Industry, Consumer Affairs, Food and Public Distribution and Textiles, Piyush Goyal on Thursday said while the Indian Diaspora in the US has been very professional and innovative in their approach, they have simultaneously maintained the strong connect with Indian culture and value system, thus keeping the soul of India alive.

He was speaking at the Luncheon Engagement with ‘Indian diaspora’ at San Francisco.

Referring to the unique positioning of the Indian Diaspora serving as the connect between India and abroad, Goyal called upon them to convey to the world about the tremendous business opportunities that India, a country of 1.3 billion aspirational market, offers.

Highlighting that India has a vibrant Start-up ecosystem today, Goyal recalled that when Prime Minister Narendra Modi launched the ‘Startup India’ in 2016, it was a recognition of the growing importance of innovation, of young talent experimenting with new ideas, coming up with new solutions.

Observing that a lot of the start up ideas that are developed in India have the cosy comfort of a large domestic market and may not have engaged with the rest of the world as much as they could, Goyal emphasised on the need to have more opportunities for our Indian Startup ideas to reach out to the global market; and added that there can be no better place than Silicon Valley to go global.

Recognizing the need for international engagement to expand, the Minister noted that no country in the world has become a developed nation without significantly expanding engagement with the rest of the world. “We need to engage with the world otherwise we will miss the bus,” he added.

Stating that the Government is playing a role of facilitator between Indian Start ups and Investors based in the US, Goyal urged them to connect with each other to take this dialogue to a new level.

Talking about the transformation that has taken place in the way of functioning of the Government of India, Goyal said, “We are trying to move away from red tapism, which existed in the past. Old ways of working are giving way to technology and transparency in a big way, bringing in honesty in the system.” The Government of India is trying to look at every single opportunity to make a conducive business environment. The approach of the government is based on more proactive engagement with people on ground, bringing in greater degree of policy certainty & predictability and making regulatory processes more aligned to what is happening in developed economies.

Speaking about the Government’s focus on providing good infrastructure across India especially remote and inaccessible areas, Goyal referred to the recent Cabinet decision to provide network connectivity in the remaining 25000 remote villages.

On Exports, Goyal said, India achieved the highest ever Goods and Services export of USD 675 billion last fiscal year, and added that this year we hope to cross USD 750 billion.

The Amrit Kaal till 2047 when we celebrate 100 years of India’s Independence, Goyal said, is going to be the defining period of India’s journey towards becoming a developed nation and bringing prosperity to every single person residing in India. The Indian diaspora has a very important role to play in this journey because they recognise talent, new ideas and innovation, guide and support and finance them. Looking forward to continuous effort and engagement to bridge India and the United States in terms of businesses and people to people contact, he added.