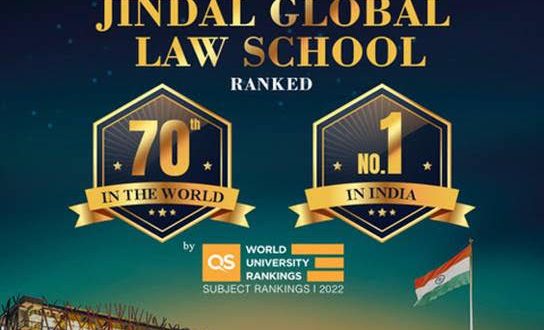 Jindal Global Law School (JGLS) of OP Jindal Global University (JGU) has once again retained the No.1 position in India while its global ranking this year improved to 70th, a jump of six places from 2021, according to the QS World University Rankings by Subject (Law) 2022 released on Wednesday.

The improvement in Jindal Global Law School’s global ranking marks a continuity in its ascent for the past several years. Before making it to the global top 70 in 2022, JGLS was ranked 76th in 2021, and in the 101-150 bracket in 2020. Its domestic ranking as the No.1 law school in India has, however, remained unchanged for the past three years.

Commenting on this remarkable achievement, OP Jindal Global University Founding Chancellor Naveen Jindal said, “The improvement in the global ranking of Jindal Global Law School this year goes on to prove that the spirit of excellence with which it was established 12 years ago remains undiminished even in the face of numerous challenges associated with the global pandemic. This has only been possible due to the relentless efforts of the university’s leadership and management team, outstanding works of our distinguished faculty members and the hard work of our students. It’s the commitment to the greater good that continuously inspires JGLS to scale new heights in academic excellence, legal training and research.”

“To see the name of an Indian university among the 70 best law schools in the world is a matter of immense pride for all of us. I congratulate our Vice-Chancellor, Professor (Dr.) C. Raj Kumar, and each member of the broader JGU community, including its faculty, students and staff for making it happen. I would also like to thank all the partner institutions in the world which have collaborated with JGU to create unprecedented opportunities for our students,” he added.

To produce the rankings by subject, QS primarily considers academic reputation, employer reputation, citations and h-index, an index that attempts to measure the stability of impact and quality of the work published by the institution’s scholars.

On reaching this important milestone, OP Jindal Global University Founding Vice-Chancellor Professor C. Raj Kumar said, “The rise of JGLS to the 70th position among the world’s top law schools in a span of just 12 years bears tremendous significance as it marks the emergence of India as an important destination for pursuing legal education of global standards and conducting cutting-edge research.”

“One of the major factors that has propelled JGLS to the 70th position in the world in the prestigious QS World University Rankings is the quality of research produced by the faculty members. It is heartening to note that during 2020-21, JGLS faculty members produced over 300+ academic research publications, of which 280+ are indexed in Scopus, which is the largest database of peer-reviewed literature in the world,” he added.

Reflecting on JGU’s achievements, Dr. Ashwin Fernandes, Regional Director, Middle East, Africa & South Asia, QS Quacquarelli Symonds observed, “It is a moment of immense pride and glory for India to have O.P. Jindal Global University rise to rank 70th in the world and 1st in India in our 2022 edition of QS World University Rankings by Subject.”

Securing a place in this year’s QS World University Rankings by Subject suggests that JGLS has put India on the global map for legal education.