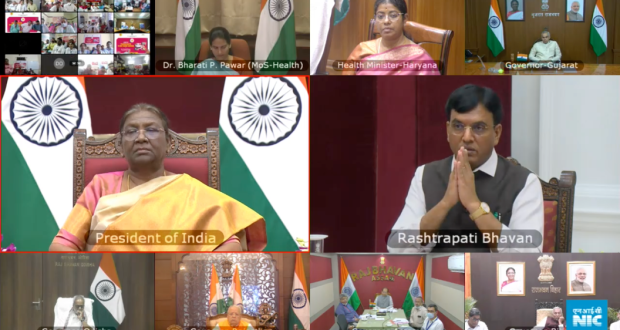 Launching the Pradhan Mantri TB Mukt Bharat Abhiyaan virtually on Friday, President of India Droupadi Murmu said that it is the duty of all citizens to give high priority to the campaign and make it a mass movement as TB causes the largest number of deaths among all other infectious diseases in our country.

The President said that the thinking and methodology of ‘New India’ is to make India a leading nation of the world. India has set an example to the world in tackling the COVID-19 pandemic. The policy of ‘New India’ to move forward with confidence is also visible in the field of TB eradication. According to the United Nations Sustainable Development Goals, all nations have set the goal of eradicating TB by the year 2030. But the Government of India has set the target of eradicating TB by the year 2025 and efforts are being made at every level to fulfill this resolution.

The President said that to make this campaign a mass movement, awareness about TB has to be created among the people. They have to be informed that prevention of this disease is possible. Its treatment is effective and accessible and the government provides a free of cost facility for prevention and treatment of this disease. She said that in some patients or communities, there is an inferiority complex associated with this disease, and they view the disease as a stigma. This illusion also has to be eradicated. Everyone should be aware that TB germs are often present in everyone’s body. When the immunity of a person, due to some reason, decreases, then this disease expresses in the person. With treatment, one can definitely get rid of this disease. All these things should reach the people. Then the people affected by TB will be able to take advantage of the treatment facilities.

The Pradhan Mantri TB Mukt Bharat Abhiyaan has been envisioned to bring together all community stakeholders to support those on TB treatment and accelerate the country’s progress towards TB elimination.