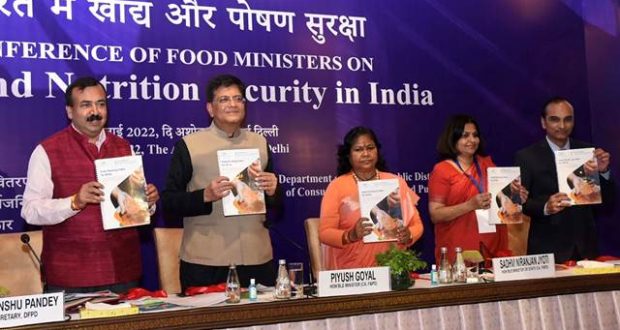 This “State ranking Index for NFSA” attempts to document the status and progress of implementation of NFSA and various reform initiatives across the country, post consultation with states. It highlights the reforms undertaken by States and UTs and create a cross-learning environment and scale-up reform measures by all states and union territories. The present Index is largely focused on NFSA Distribution and will include procurement, PMGKAY Distribution in future. The Index for ranking the states and UTs is built on three key pillars which covers the end-to-end implementation of NFSA through TPDS. These pillars are: i) NFSA— Coverage, targeting and provisions of the Act, ii) Delivery platform, and iii) Nutrition initiatives.

This ranking is generated by data provided by the states about their food and public distribution processes, vital for ensuring that no one goes hungry.

It was released by Union Minister for Consumer Affairs, Food and Public Distribution, Piyush Goyal at the conference of Food Ministers on the theme of ‘Food & Nutrition Security of India’.

“The Index has been developed with the objectives of creating an environment of competition, cooperation, and learning among the states; states learning from each other their best practices while addressing grave matters of food security and hunger,” Goyal said.

The ranking will also help create transparency in the system to publish reliable and standard data in the public domain for citizens, the government said.

Speaking on the occasion, Goyal said that India is now 100% connected under One Nation One Ration Card (ONORC). He complemented Prime Minister Narendra Modi for visualizing this pathbreaking initiative and all those associated with it. He said that 45 crore transitions have taken so far providing the beneficiaries the freedom to collect ration from any State/UT in the country. He said that during COVID, ONORC supported migrants.

Goyal said that going forward, the system of digitized, Aadhaar linked Public Distribution will be used to issue Ayushman Bharat Card. He urged other states to consider this system to provide nutritional security as well as health security. He said that immunization of migrant kids can also be linked with the system to ensure medical facility to them.