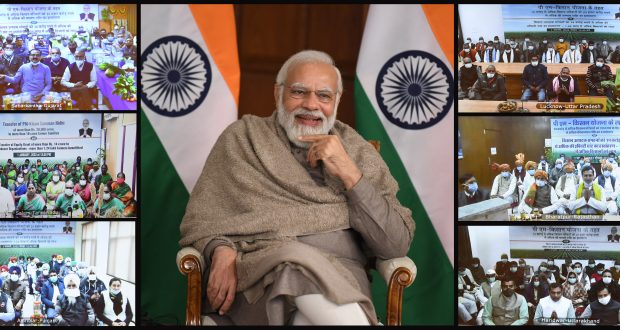 In line with the continued commitment and resolve to empower grassroot level farmers, Prime Minister Narendra Modi released the 10th instalment of financial benefit under Pradhan Mantri Kisan Samman Nidhi (PM-KISAN) scheme on Saturday via videoconferencing. This enabled the transfer of an amount of more than Rs. 20,000 crore to more than 10 crore beneficiary farmer families.

During the programme, the Prime Minister also released equity grant of more than Rs. 14 crore to about 351 Farmer Producer Organizations (FPOs), which will benefit more than 1.24 lakh farmers. Modi interacted with FPOs during the event. Union Minister Narendra Singh Tomar and Chief Ministers, LGs, Agriculture Ministers and farmers from several states were linked to the event.

Interacting with FPO from Uttarakhand, the Prime Minister inquired about the choice of organic farming by them and the  ways of certification of the organic products. He also talked about the marketing of the organic products of the FPO. The FPO also told the Prime Minister how they arrange for organic fertilizers. The Prime Minister said that it has been the efforts of the government that natural and organic farming is widely promoted as it reduces the reliance on chemical fertilizer and improves the income of the farmers.

The FPO from Punjab informed the Prime Minister about the ways of disposing off the parali without burning. They also talked about the superseeder and help from government agencies. The Prime Minister wished that their experience of Parali management should be emulated everywhere.

FPO from Rajasthan talked about the honey production. They said that concept of FPO has been very useful for them with the help of NAFED.

FPO from Uttar Pradesh thanked the Prime Minister for creating FPOs as foundation of the prosperity of the farmers. They talked about their process of helping the members with seeds, organic fertilizers, and variety of horticulture products. They also talked about helping farmers with getting benefits of the government schemes. They are getting benefits of e-Nam facilities. They promised to fulfil the Prime Minister’s vision of doubling the farmers income. The Prime Minister said that the confidence of the country’s farmer is the key strength of the country.

FPO from Tamil Nadu informed that with NABARD support, they formed FPO to get better prices and the FPO is fully owned and operated completely by women. They informed the Prime Minister that Sorghum is being produced due to the weather conditions of the area. The Prime Minister said Nari Shakti’s success is indication of their indomitable will power. He asked the farmers to take benefits of millet farming.

FPO from Gujarat talked about natural farming and how cow-based agriculture can reduce the expense and stress on soil. Tribal communities of the region are also benefitting from the concept.

The Prime Minister said that PM Kisan Samman Nidhi is a big support for India’s farmers. If we include today’s transfer, more than 1.80 lakh crore rupees have been transferred directly to the accounts of the farmers, he said.

The Prime Minister said that through FPO’s small farmers are feeling the power of collective strength. He pointed out five benefits of FPOs for small farmers. These benefits are increased bargaining power, scale, innovation, risk management and adaptability to the market conditions. Keeping in mind the benefits of FPO’s the government is promoting them at every level. These FPOs are getting help of upto Rs.15 lakh. As a result, FPOs like Organic FPOs, Oil Seed FPOs, Bamboo clusters and Honey FPOs are coming up all over the country. “Today our farmers are benefitting from the schemes like ‘One District One Products’ and markets, both nation and global, are opening for them”, the Prime Minister said. He said that reliance on imports is being reduced by schemes like National Palm Oil Mission with a budget of Rs 11,000 crore.

Modi talked about the milestones that were achieved in the agriculture sector in the recent years. Food grain production touched 300 million tonnes, similarly Horticulture and floriculture production reached 330 million tonnes. Milk production also increased almost 45 per cent in last 6-7 years. About 60 lakh hectare land was brought under micro irrigation; more than 1 lakh crore were given in compensation under Prime Minister Fasal Bima Yojana, whereas premium received was just 21 thousand crores. Ethanol production increased from 40 crore litres to 340 crore litres in just seven years. The Prime Minister also informed about the Goberdhan Scheme to promote bio-gas. If there will be value in cow dung, he said, the non miltching animals will not be burden on farmers. The Government has established Kaamdhenu Commission and is strengthening dairy sector infrastructure.

The Prime Minister once again pushed for promotion of natural farming. He said that chemical-free farming is a major way of protecting the health of soil. Natural farming is a key step in this direction, he said. He asked for making every farmer aware of the processes and benefits of natural farming. The Prime Minister concluded by calling upon the farmers to keep on doing innovation in farming and support the movement like cleanliness.