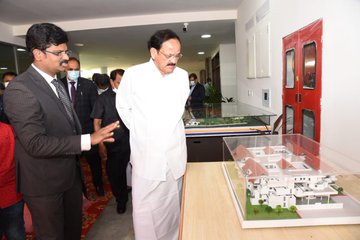 Schools must foster the spirit of curiosity and innovation in students: Vice President

Vice President M. Venkaiah Naidu on Wednesday appealed to schools across the nation to foster the spirit of curiosity, innovation and excellence in students to prepare them for the challenges of the Shri 21st century, technology-driven world.

Calling for a futuristic approach to education while shunning rote education, Naidu said, “The best skill schools can impart to students today is that of adaptability”. “Train students to think quickly on their feet, to be agile and to innovate using cutting-edge technologies,” he added.

The Vice President was inaugurating the Vellore International School, an initiative of VIT Group of Institutions, near Chennai.

Stressing the importance of schooling during the formative years of a child, Naidu expressed concern that students were spending most of the time in the four walls of the classroom under the conventional education system. He called for encouraging the students to “experience the world outside – spend time in the lap of nature, interact with all sections of society, and understand various crafts and trades”.

Naidu wanted classroom learning to be supplemented with field activities, social awareness and community service initiatives and added that there is a dire need to inculcate the spirit of service and patriotism in students from a young age.

The Vice President recalled that India’s ancient Gurukul system focused on the holistic development of an individual with the teacher spending time with the child. The stress was on character moulding and the correct assessment of the pupil. Observing that schools must borrow the positive aspects of ‘guru shishya parampara’, Naidu also called for doing away with the artificial segregation between curricular and extracurricular activities and encouraging multidisciplinarity in education.

The Vice President wanted schools to focus on imparting a value-based, holistic education that brings out “the greatest potential and the highest virtues from each student”. He reminded that “education without values is no education at all”.

Underlining the importance of the mother tongue as the medium of instruction in schools, Shri Naidu said that “we must encourage students to speak freely in their mother tongue in their social environment. Only when we can freely and proudly speak in our mother tongue can we truly appreciate our cultural heritage.”

He also pointed out that proficiency in other languages, in addition to one’s mother tongue, helps build cultural bridges and opens windows to new worlds of experience. Emphasising that there should be “no imposition of and no opposition to any language”, the Vice President suggested that one must learn as many languages as possible but primacy must be given to mother tongue.

Naidu also appealed to schools to encourage students to take up regular physical activity to ensure all-around growth of children. He advised students to enthusiastically take up sports or any form of exercise to build a healthy lifestyle.