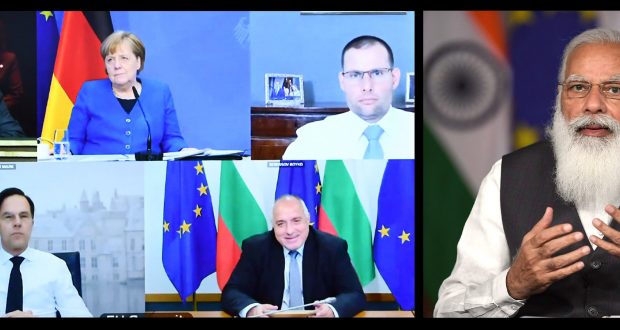 The Prime Minister, Shri Narendra Modi participates in the India-EU Leaders Meeting through video conferencing, in New Delhi on May 08, 2021.

The leaders of the European Council on Saturday expressed their desire to further strengthen the India-EU Strategic Partnership based on a shared commitment to democracy, fundamental freedoms, rule of law and multilateralism.

During the India-EU Leaders’ Meeting held in a hybrid format, the leaders exchanged views on three key thematic areas — foreign policy and security; COVID-19, climate and environment; and trade, connectivity and technology. They discussed forging closer cooperation on combating the COVID-19 pandemic and economic recovery, tackling climate change, and reforming multilateral institutions. India appreciated the prompt assistance provided by the EU and its member states to combat its second COVID wave.

At the invitation of the President of the European Council Charles Michel, Prime Minister Narendra Modi participated in the meeting. This is the first time that the EU hosted a meeting with India in the EU+27 format.

The leaders welcomed the decision to resume negotiations for balanced and comprehensive free trade and investment agreements. Negotiations on both the Trade and Investment Agreements will be pursued on parallel tracks with an intention to achieve early conclusion of both agreements together. This is a major outcome which will enable the two sides to realise the full potential of the economic partnership. India and the EU also announced dedicated dialogues on WTO issues, regulatory cooperation, market access issues and supply chain resilience, demonstrating the desire to deepen and further diversify economic engagement.

India and the EU launched an ambitious and comprehensive ‘Connectivity Partnership’ which is focused on enhancing digital, energy, transport and people-to-people connectivity. The Partnership is based on the shared principles of social, economic, fiscal, climate and environmental sustainability, and respect for international law and commitments. The Partnership will catalyse private and public financing for connectivity projects. It will also foster new synergies for supporting connectivity initiatives in third countries, including in the Indo-Pacific.

India and the EU leaders reiterated their commitment to achieving the goals of the Paris Agreement and agreed to strengthen joint efforts for mitigation, adaptation and resilience to the impacts of climate change, as well as providing means of implementation including finance in the context of COP26. India welcomed the EU’s decision to join CDRI. India and the EU also agreed to enhance bilateral cooperation on digital and emerging technologies such as 5G, AI, Quantum and High-Performance Computing including through the early operationalization of the Joint Task Force on AI and the Digital Investment Forum.

The leaders noted with satisfaction the growing convergences on regional and global issues, including counterterrorism, cybersecurity and maritime cooperation. The leaders acknowledged the importance of a free, open, inclusive and rules-based Indo-Pacific and agreed to closely engage in the region, including in the context of India’s Indo-Pacific Ocean’s Initiative and the EU’s new strategy on the Indo-Pacific.

Coinciding with the Leaders’ Meeting, an India-EU Business Roundtable was organised to highlight the avenues for cooperation in climate, digital and healthcare. A finance contract of Euro 150 million for the Pune Metro Rail Project was signed by the Ministry of Finance, Government of India, and European Investment Bank.

India-EU Leaders Meeting has set a significant milestone by providing a new direction to the Strategic Partnership and giving a fresh impetus for implementing the ambitious India-EU Roadmap 2025 adopted at the 15th India-EU Summit held in July 2020.