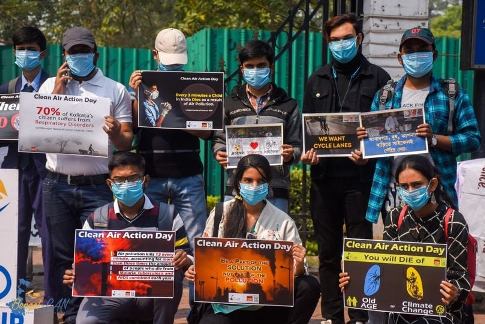 In a first of its kind campaign, concerned citizens across Odisha have joined hands to demand that the Urban Local Bodies (ULBs) mandatorily issue timely health advisories publicly, to alert citizens on ‘bad air’ days, which will help save vulnerable groups from severe health impacts of air pollution.

Bad air days are when the air quality index (AQI) – pollutant measuring indicator – rises beyond the safe limit for any location falling either under the poor, very poor or hazardous AQI levels.

University of Chicago’s Air Quality Life Index suggests that residents in Cuttack and Bhubaneswar could live 2.7 years longer if the government meets the WHO air quality standards.

According to a report of the Odisha State Pollution Control Board, Bhubaneswar is recording an alarming level of suspended particulate matter (SPM) in air. Six cities of Odisha are among the 102 most polluted in India. A non-attainment city is one that does not meet the prescribed air quality standards set by the Union environment ministry.

“It’s time that we realize that air pollution is cutting our lives short. It’s time that the health impacts of air pollution become a subject of discussion at our homes, schools, and offices. It’s time to create conversations that can drive create lasting change,” said Ashirbad S. Raha, EPIC India, University of Chicago

An online campaign has been initiated on the International Day of Clean Air for Blue Skies today, with the theme ‘Healthy Air, Healthy Planet’, which emphasizes the health aspects of air pollution, especially considering the Covid-19 pandemic.

According to Vinay Jaju, Founder of SwitchOn Foundation and member of West Bengal Clean Air Collective, “Using the online petition, citizens will be demanding timely public health advisories be issued widely in the mainstream public domain so that we all can not only protect ourselves but also our loved ones when the air quality in the city deteriorates. The campaign also demands proper implementation of the Clean Air Action Plan across all 7 non-attainment cities.”

To celebrate the occasion, SwitchON Foundation organised a webinar which had speakers from eminent institutions like the University of Chicago, NUJS, IIM Calcutta, XLRI, KIIT, CU, XISS etc. sharing their thoughts on the prominence of youth in mitigating Air Pollution by taking an active role in advocating for Clean Air.  “We have to take climate change beyond talks, debates and street campaigns and make it actionable. We can’t wait for leadership of Governments to agree, but we as people have to take the lead.” said Dr. Saroj K Mahapatra, KIIT School of Management.

“Air Pollution – We don’t see it yet; it is there, we don’t feel it, yet we have problems associated with it as a significant human health issue.” said Prof. Dr. Nirmal Kanti Chakrabarti, Vice Chancellor of National University of Juridical Sciences (NUJS)  while inaugurating the Clean Air Champions Cohort, launched by SwithON Foundation in partnership with WWF, Greenpeace, EDN etc . The cohort will select youth from West Bengal, Jharkhand, Odisha who are keen to bring a reformative change in their lives and the environment. They will be trained through workshops and be given the required support in terms of resources and mentorship to take up projects to mitigate air pollution in the three states.

Vinay Jaju further said that the citizen’s groups across Odisha want the government to know that they are aware of the time-bound action points listed under the Clean Air Action Plan. “As part of this campaign, we are also launching a Clean Air Champions Cohort among the youth of West Bengal, Jharkhand and Odisha. Citizen groups across Odisha and other cities in West Bengal will also meet their respective Municipal Commissioners and submit a letter stating the demand of health advisory when air quality deteriorates,” he said.

The online petition is also being shared widely on social media and WhatsApp groups and already over 20 organisations across India have actively supported this campaign. Citizen organisations across Bhubaneswar that are supporting and have already signed the petition are also planning to spread awareness across other non-attainment cities of Odisha.

Stating that the air quality index (AQI) was created to make the general public aware, former Additional Director of Central Pollution Control Board (CPCB) Dipankar Saha said, “Urban local bodies must issue health warnings when the AQI for a certain region crosses the safe limit to ensure the public can take appropriate decisions to protect themselves. It has to be a mandatory requirement for all. Thus the National Clean Air Program (NCAP) has its focus right at the ULB level.”

Several studies have already shown the impacts of air pollution on not only respiratory organs but also the brain and even reproductive organs. Recently a first pan-India study conducted by scientists from four institutes across the country found a direct correlation between air pollution. The study stated that areas with poor air quality and higher emissions of particulate matter (PM) 2.5 are more likely to have Covid-19 infections and related deaths.

Divya Narayanan, Campaigns Director for Jhatkaa.org, which has created the portal for the citizen’s campaign, said that the pandemic had forced us all to seek out as much information as possible to safeguard our health and of our loved ones against the virus. “In the same manner, we must realise that we need to demand more information to be made widely available about the air we breathe, and its effects on our health. It’s all the more important now in light of Covid-19, that we have information widely made available to us so we can make learned choices for our health on bad air days,” she said.

Ronak Sutaria, Founder of Respirer Living Sciences, which focuses on real time data monitoring shared that the health advisories will prove to be a very effective tool for everyone, especially those who suffer from respiratory issues, senior citizens and pregnant women. However, it’s important that the health advisory should be hyperlocal in nature as it will help users know about days and time when they should avoid outdoor activities like walking, cycling or other exercises as well as avoid having people vulnerable to breathing difficulties and small children for playing outdoors in their specific locality,” he said, adding that globally this is already being done and there are simple and effective templates available that our ULB’s can use to send these neighbourhood-level advisories in a manner that people will understand.

Speaking on the occasion, Prof. S N Tripathi from the Civil engineering department of IIT Kanpur who is the steering committee member of National Clean Air Program (NCAP)  said: “The role of urban local bodies is extremely important across all non-attainment cities as it gives them the impetus to enhance and expand monitoring networks, create a data and dissemination mechanism (website, local media and radio), and thirdly manage the city properly (better traffic and waste management). ULBs also have to allocate monetary resources in line with these frameworks that have been provided under the 15th Finance Commission and NCAP budgets and thus they need to focus on issuing health warnings associated with different air quality labels and communicating them to citizens on a daily basis for better awareness.”

‘International Day of Clean Air for Blue Skies’ was declared by the United Nations General Assembly on September 7 in recognition of the growing interest in clean air among the international community, and the need to continue improving air quality to safeguard human health. “Clean Air for All” was the subject for the first ever International Day of Clean Air for Blue Skies, which was introduced last year. “Healthy Air, Healthy Planet” is this year’s topic for International Day of Clean Air, which highlights the health implications of air pollution, particularly during COVID-19’s pandemic. A healthy air environment is a top priority, but the discourse should also include climate change, human and planetary health, and the Sustainable Development Goals. He uses it as a rallying cry to action for all of us to unite our efforts and claim the right to clean air together.