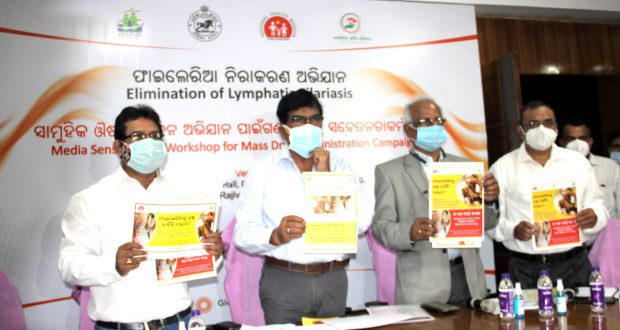 “Under the Mass Drug Administration (MDA) programme, the participation of community is extremely crucial. With the commitment towards elimination of filariasis, it is very important for public representatives, officials, health workers and the community to make the filariasis elimination program a public movement,” said Dr. Ajit Kumar Mohanty, Special Secretary to Department of Health and Family Welfare, Government of Odisha.

Participating in a media sensitization workshop organized by the State Health department in collaboration with Global Health Strategies here today, Dr. Mohanty further said that “only with the support of the community and the media, we will be able to eliminate LF completely. If beneficiaries in large numbers consume anti-filaria drugs, it will break the chain of transmission.”

The objective of the workshop was to ensure the dissemination of information highlighting the debility caused by Lymphatic Filariasis, so that people could get accurate information about the seriousness of the disease.

Notably, the Health and Family Welfare Department of the Odisha Government will organize the Mass Drug Administration (MDA) round in a phased manner for elimination of Lymphatic Filariasis (LF) in 15 endemic districts of the state.

The first phase of the Mass Drug Administration program will begin from February 10 and will continue till February 19, while the second phase will be held from March 7 to March 16.

During Mass Drug Administration (MDA) rounds, it will be ensured that eligible beneficiaries in the endemic districts must consume anti-filarial drugs in the presence of health workers. Everyone except children below 2 years, pregnant women and seriously ill people must consume the prescribed dosage during the rounds in the presence of trained health workers, said Dr. Mohanty.

During the campaign around 55,544 trained volunteers including ASHAs will visit every household as Drug Administrators.

Dr. Niranjan Mishra, Director, Public Health, Government of Odisha, said that filariasis is one of the leading causes of long-term disability worldwide. Commonly acquired in childhood but manifested in adulthood, this infection damages the lymphatic system and if left untreated, it causes abnormal swelling of the body parts which is irreversible. People with Filariasis often suffer from manifestations such as Hydrocele (inflammation of the scrotum), lymphoedema (swelling in the limbs) and Chyluria (milky white urine). The condition affects livelihoods, opportunities and working capacity of those suffering from it.

Filariasis is a disabling disease which can be prevented by consuming anti-filaria drugs (DEC and Albendazole) administered by trained health workers,” added Dr. Mishra.

Anuj Ghosh, Senior Director, Global Health Strategies, emphasized that with the combined efforts of all, debilitating disease like Lymphatic Filariasis can be we can eliminated from Odisha.

India’s National Programme for Elimination of Lymphatic Filariasis has a two-pillar strategy:

Mass Drug Administration (MDA): Anti filarial drugs are administered to prevent transmission of Filariasis in the endemic areas; and Morbidity Management and Disability Prevention (MMDP): Caring for patients through home-based morbidity management for lymphoedema and surgical correction for hydrocele cases.

State representatives of World Health Organization (WHO) and Project Concern International (PCI) were also present at this media workshop.