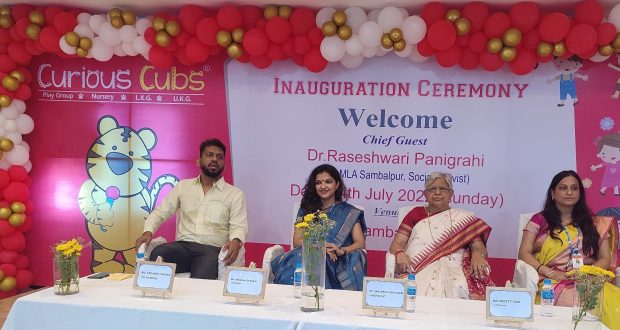 Curious Cubs Pre-school, an initiative to bridge the towering gap in the standard and quality of early childhood education between eastern India and rest of the developed parts of the country, has opened its new centre in Sambalpur.

The centre was inaugurated by former MLA Dr. Raseshwari Panigrahi at Cheruapada in the town.

This is the second Centre in Sambalpur and the fifth centre in Odisha after Rourkela, Bhubaneswar and Jharsuguda with over 600 students.

Co-founder and Chairperson Debashri Debjani in her address at the inauguration ceremony told about the journey of the school from just seven students to over 600 students. She said Curious Cubs is an all-women organization with 80 women among its staff. Curious Cubs has been selected in the top 25 inspiring schools amongst over 1500 Xseed schools in India, as per a recent book “25 stories about a million children”.

Curious Cubs Pre-school is known for its international curriculum, state of art infrastructure and its innovative teaching methodologies, said Co-founder Saransh Pansari. “With a teacher student ratio of 1:10, we aim to drive the change in conventional ways of teaching,” he added.