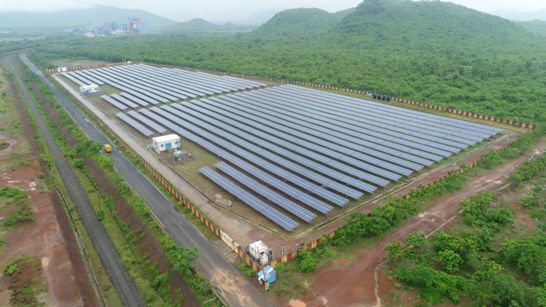 As part of its long term commitment towards renewable energy transition, Dalmia Cement (Bharat) Limited (DCBL), a leading Indian cement major and a subsidiary of Dalmia Bharat Limited, has added its ground-mounted solar power plant capacity to 17.1 MW (from 2.4MW in 2014), in Cuttack. Spread over 49 acres, the solar power plant is set to generate 25.52 MU/PA, to be utilized for the energy requirements of its Kapilas Cement Manufacturing Works (KCMW) in Cuttack district of Odisha.

Furthering Dalmia Cement (Bharat) Limited’s sustainability goal of becoming carbon negative by 2040, this initiative will enhance the plant’s energy efficiencies. The 17.1 MW plant aims to reduce KCMW Cuttack plant’s day-time power requirement dependency on fossil fuels by over 40 percent and replace it with a clean, emissions-free, and renewable energy source.

“We see the solar power plant expansion at our KCMW plant in Cuttack as providing the right impetus for our endeavors to continually adopt the cleanest and most economical fuel. We are confident that this move will help bolster DCBL’s sustainability target of RE100 by 2030 as we march towards taking our overall installed cement capacity to 110 -130 million tonnes by 2031,” he added.

The project, executed in a record time of two and a half months, will reduce conventional power consumption by 27 percent. Power consumption from the solar plant will ensure seamless production at the KCW, Cuttack plant, especially during emergencies such as preventive maintenance or breakdowns, the Company said in a statement.

“By shifting to solar power and other renewable energy sources at our facility, we are progressively reducing our overall carbon footprint while meeting our sustainability commitments and heading towards RE100 by 2030. This will also enable us to meet our capacity expansion plans over the years for which we see a balanced energy mix as a key advantage,” said Bhavesh Wala, Plant Head at Dalmia Cement (Bharat) Limited, KCMW(Cuttack).

In line with its business philosophy – Clean and Green is profitable and sustainable –Dalmia Bharat reduced its carbon footprint by 22 percent in the last decade while growing three times to double its profitability. Today, the Company has one of the lowest carbon footprints globally and is committed to becoming carbon negative by 2040.