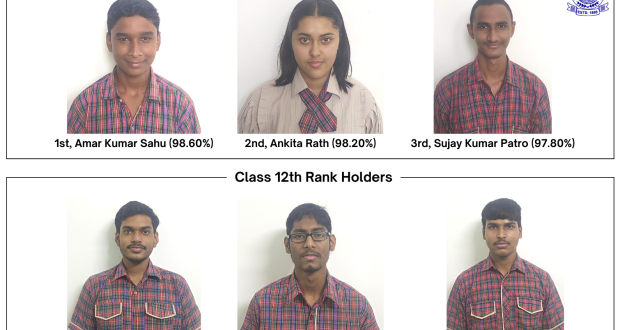 Students of the DAV Vedanta International School at Lanjigarh, run by Vedanta Ltd.’s Lanjigarh refinery, India’s premier producer of metallurgical grade alumina, have scripted phenomenal results in the CBSE Board Examinations 2022. With all 73 students of Class 10th and 12th passing with first division, the result bears testimony to Vedanta’s commitment to foster quality education in the regions where it operates.

This year’s CBSE Board Exam results saw Soubhagya Biswal top the Class 12th batch with 96.40 per cent while Pratyush Ranjan Jena (96.20 per cent) and Mamadipaka Balaji (95.40 per cent) were the second and third rank holders, respectively.

Amar Kumar Sahu topped in Class 10th with 98.60 per cent, while Ankita Rath (98.20 per cent) and Sujay Kumar Patro (per cent) were in second and third position, respectively.

Congratulating the students, Vedanta Ltd Lanjigarh Deputy CEO GG Pal said, “On behalf of the Vedanta family, I congratulate the entire graduating batch of DAV Vedanta International School, and wish them the very best for their careers ahead! The school’s continued excellence in board exams year on year stands testimony to the impact that our education initiatives have brought about in the community. I applaud the efforts of the school principal, Mr. Sadananda Hotta, teachers, staff, and parents of the students for their contribution and support towards making this school one of the best in the state! We, at Vedanta Lanjigarh, shall continue to work towards improving the education standards in the region, for education remains the key to unleashing transformational growth and socio-economic development in the region.”

Delighted by the students’ performance, DAV Vedanta International School, Lanjigarh Principal Sadananda Hotta said, “It is a matter of great pride for the school’s entire staff to see our students performing so well. I extend my heartfelt gratitude to Vedanta Aluminium for providing all required resources and support to the school, which helped the students make the most of their education and chase the best of their potential.”

Established by Vedanta’s Lanjigarh unit, the DAV Vedanta International School was Kalahandi’s first English medium school. Well-equipped with state-of-the-art infrastructure and facilities like smart classrooms, modern computer, science and maths labs, multimedia room, a well-stocked library, etc. the school fuels the curiosity of nearly 1200 students, the majority of whom are from local communities. This school has created an aspiration for quality education among local communities, which is reflected in the rise in literacy levels in Kalahandi from 38.4 per cent in 2001 to 50.9 per cent in 2011.

Since the school’s commencement in the year 2006, Vedanta Lanjigarh continues to support and augment the school’s infrastructure so that the children learn in a holistic and encouraging environment. Owing to the remoteness of the region and the lack of formal education infrastructure, the school provides affordable education to enable every child from the nearby villages to avail quality education in English. Additionally, under its Nand Ghar program, Vedanta Aluminium also runs over 100 modern anganwadis in Kalahandi wherein proper education and nutrition is being ensured for children below the age of six in state-of-the-art facilities.

Vedanta Aluminium’s social interventions in the domains of quality education, sustainable livelihood, women empowerment, health, water and sanitation, community infrastructure reach out to a total of over 67 villages in Lanjigarh, benefiting more than 40,000 people in a year. It gives educational support to more than 2700 students, along with enabling the empowerment of more than 3300 women from over 300 SHGs and providing doorstep healthcare services to more than 42,000 people annually. It has also planted more than 2 lakh trees in partnership with the locals at the community level.

Vedanta Aluminium, a business of Vedanta Limited, is India’s largest producer of aluminium, manufacturing half of India’s aluminium i.e., 2.26 million tonnes in FY22. It is a leader in value-added aluminium products that find critical applications in core industries. Vedanta Aluminium ranks 4th in the Dow Jones Sustainability Index (DJSI) 2021 world rankings for aluminium industry, a reflection of its sustainable development practices. The company operates a 2 MTPA (million tonnes per annum) capacity alumina refinery in Lanjigarh (Kalahandi district, Odisha), India since 2007 and an associated 75 MW captive power plant. With its world-class aluminium smelters, alumina refinery and power plants in India, the company fulfils its mission of spurring emerging applications of aluminium as the ‘Metal of the Future’ for a greener tomorrow.