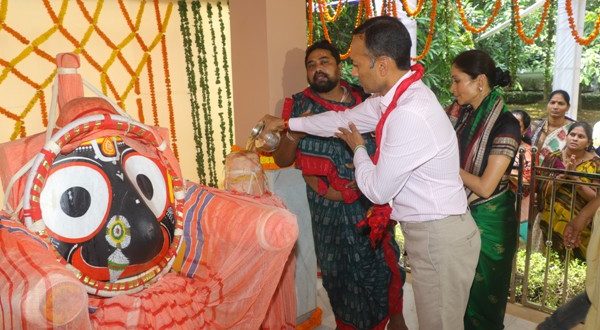 Celebrating the Debasanana Purnima in line with the Puri Shree Mandir rituals, the auspicious day started at early in the morning at 6 am and the priests performed Dwara Phita, Mangal Aarati, Mangalarpana, Puspanjali, Dori Bije, etc. followed with Dhadi Pahandi of the deities from the main temple to Snana Mandap where Mangal Aarati, Tadap Lagi, Abakas, Srimukha Pocha and other rituals were performed under the guidance of the chief priest.

After the Snana Yatra rituals, the deities are believed to fall ill, and will be resting in Anabasara Ghara for the next 14 days to recover.

Now, devotees can get a glimpse of the Trinity on the 29th of this month when the deities will be giving Darshan with their ‘Naba Yauvan Besa’.

This year, the residents of Jindal Nagar and the villagers from the periphery are very much excited to celebrate the first Car Festival (Rath Yatra) of Devbhoomi at Angul Jindal Nagar and the management of Jindal Steel and Power is also expecting a huge gathering of devotees to pull the holy chariots of Lord Balabadhra, Lord Jagannath and Devi Subhadra from Jagannath Temple to Sri Gundicha Temple and return on Bahuda Jatra.