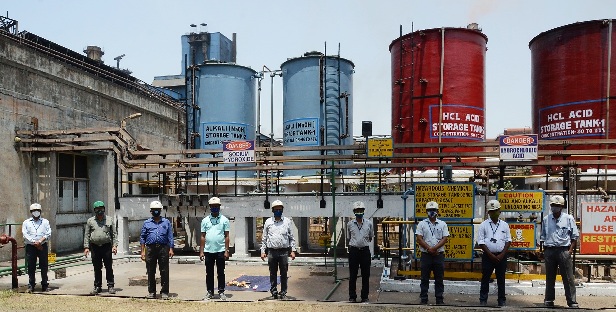 Notably, the DM water treatment plant of 3 streams of 75 cubic meter per hour capacity consists of regeneration units with exchangers of acid (HCL) & alkali (NaOH). It is being supplied from acid and alkali storage tanks. These tanks had developed severe leakages and the structures had got corroded thereby becoming a safety hazard. The team of DM water treatment plant, PBS led by SN Jena, Master Operative, meticulously planned the job and revamped the tanks within a short span of 15 days each using in-house resources without affecting plant production and ensuring safety measures. The effort led to a direct saving of around Rs. 5 lakh on one time basis besides considerably enhancing the safety of the acid and alkali systems.

In a similar effort, the Sulphuric Acid storage tank of 30 Ton capacity was made functional utilizing in-house resources by the dedicated team of the department led by P Lenka, Master Operative. It has resulted in direct savings of around Rs. 8 lakh and will enable huge savings due to less consumption of steam, which can be gainfully utilized for power generation.

The reconditioning and revamping jobs executed by the team demonstrate the creative and technical expertise of the CPP-3 team.

The jobs were accomplished under the leadership of S K Mallik, Assistant Manager, CK Sinha, Manager and under the guidance of SS Sistla, DGM (PBS). SL Das, GM, CPP-1 supervised the jobs.

In a function organised recently at CPP-3, the men associated with the job SN Jena and P Lenka inaugurated the revamped systems in the presence of B Sunil Kartha, CGM (Power) and other senior officers and employees of the department.