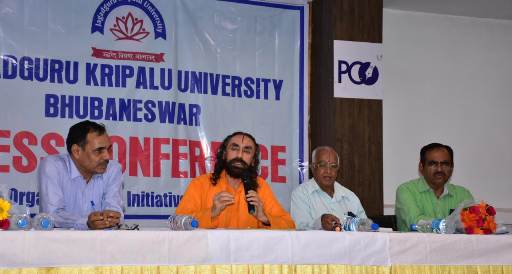 In a bid to facilitate and implement scaling of organic and natural farming in Odisha, Jagadguru Kripalu University (JKU) on Saturday launched a pilot project, ‘The Organic Odisha’ in Bhubaneswar. This endeavor will promote natural and organic farming by the small and marginal farmers of Odisha for their sustainable livelihood and food security. It will support and encourage the implementation of state policy of organic farming framed by the state government in 2015.

The Organic Odisha initiative is being launched in conjunction with USA-based NANBAN Foundation, a leading charitable organization that has teamed up with JKU to provide financial and technical support to propel this project forward. NANBAN Foundation is committed to enabling farmers in India make organic food affordable to everyone to lead a healthy life. They endeavor to empower farmers to adapt organic farming as part of their ecosystem which can achieve sustainable productivity without the use of artificial chemical fertilizers and pesticides.

The ‘The Organic Odisha’ project will be undertaken in 20 different clusters in districts of Rayagada, Puri, and Cuttack for the next three years. The goal is to create prototypes of successes in these clusters in organic and natural farming sectors, for other districts to follow and make it a mass movement in coming days.

The project will cover 2500 farmers in 20 clusters, empowering 500 villages to do natural farming. The practice can be adapted either in land where there has been no prior chemical fertilizer and pesticide-based farming, or by converting existing chemical farmlands into organic and natural ones.

The pilot initiative will convert 1000 acres in three years, based on the involvement of at least 125 farmers and 50 acres of land in every cluster. Through collaboration and partnership with government schemes and private sectors (especially, corporate CSR and sustainability initiatives), the focus is to propagate organic farming as an alternative livelihood to the people and farmers of the state.

The learnings of this project will also provide practical knowledge of ecological principles and basis for curriculum for courses at JKU for students of Agricultural Technology and Economics. Further, the program will set up ‘Organic Haats’ in rural areas, exposing farmers to best practices in the fields, as well as helping with the production of organic manure by farmers and others. One of the key features of the project is to engage women Self Help Groups (SHGs), Producer Groups, and Farmer’s Producer Companies in natural farming practices.

While states like Andhra Pradesh (AP) have targeted to become 100 percent organic agriculturally by 2024, India targets to convert at least 2 million of its total 141 million hectors of farmland being cultivated annually as present to natural and organic by 2025. In fact, the union budget of India 2022-23, has strongly stressed to go for massive zero budget natural and organic farming (ZBNF) in the country, beginning with 5km-wide land corridors along the Ganga. The budget has also proposed upgrading curricula in agricultural universities to include courses on ZBNF.

Currently, Odisha has 6.5 million hectors of net sown farmland under cultivation annually. Of that, only 97 thousand hectors are reportedly organic of different forms, despite the comprehensive state organic farming policy since 2015. Numerous centrally and state sponsored schemes are currently undertaken by the government for the promotion of organic farming. However, the growth of organic and natural farming has remained sporadic and stagnant. Various factors have contributed to this, including the lack of involvement of women SHGs, who have proved themselves as change agents for many development goals in the state over the last decades. A welcome movement has been initiated between the Tribal Department and Mission Shakti promoting a new scheme for SHGs to undertake organic farming in five tribal districts. This pilot will certainly give a strong boost to government efforts.

Earlier, the Odisha government focused on 15 districts that were primarily tribal and of hilly terrains for organic farming. They envisioned these high lands were ideal for natural crops because they were free from chemical fertilizers and pesticides. However, crops such as cotton and other heavily used hybrid seeds posed a challenge to the organic movement in the state. The critical limiting factor of organic farming is the lack of organic manures. Fortunately, this can easily be developed by SHGs, not only by natural methods but also with the use of natural substances. This would also provide a revenue stream resulting in an alternative livelihood source for them.

Presently, Odisha requires 9.5 million tons of chemical fertilizer annually from external sources to cultivate its land. This project is a perfect avenue to reduce the need for artificial composts and replace with organic ones. Since organic manure can be produced by local farmers, it will make the state self-sufficient in its agricultural needs.

“Natural and organic farming is an urgent need of humankind and planet earth. It began as an environmental movement, but now organic farming is emerging more as a precondition for healthy India. Besides having strong environmental angles to it to fight climate change, it also provides agricultural biodiversity by farmer’s actions from the ground. Even though, there is growing demand for organic farming across the globe, its pace is very skewed and bit slow. In India, such movements cannot succeed unless farmers come forward and consider organic and natural farming as their sustainable source of livelihood. Making farmers aware and building their agricultural capacity is key to the progress of these initiatives. Considering the urgencies for organic and natural farming in India, I am happy and feel privileged to launch The Organic Odisha project at JKU in partnership with NANBAN Foundation – a USA based philanthropic organization and an expert in natural farming promotions on a global scale,” said Swami Mukundanandaji, founder of JKU, Odisha.

“The idea is to convert at least 10 percent of farmland in Odisha into organic and natural farming by 2036. That year marks the 100th birth year of the state. It is an opportunity to bring up a robust organic food chain industry in the state, providing employment to lakhs of youths in it. It will thereby give a strong boost to the concept of circular and sustainability sectors of economy in the state and country. The Organic Odisha is an excellent pilot initiative to experiment with. It will shed light on practices that yield positive results versus those that don’t in different ecological and social economic environments. This project will set a precedent for the future,” said Dr. S. K. Dash, Chancellor of JKU.

In this nendeavor of JKU, along with financial support of NANBAN Foundation, USA, the Sparsh Social Foundation, Odisha, and the CSR company of JK Paper, have extended their operational base to implement the project successfully on the ground.