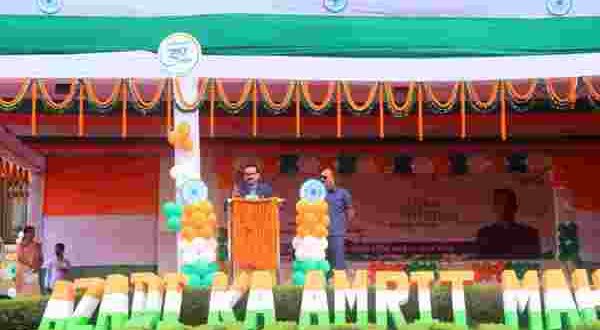 On this occasion, Saraogi, read out the message of the JSP Chairman Naveen Jindal, in which Jindal expressed his gratitude to the Government of India for the recent amendments in the Flag Code.

Reminiscing on his long battle that enabled all Indians to display the national flag at their homes, Jindal in his message said, “This year is special for me as my dream of every Indian home must display Tiranga is becoming a reality. For the last 30 years, I am making constant efforts to realise this. I believe that if we do our work with integrity and dedicate ourselves to the values of Tiranga, nobody can stop India to be a developed country.”

Extending his Independence Day greeting, Saraogi said, “We are really very fortunate to have a Chairman whose passion for the nation and the National Flag Tiranga is a mark of his identity. Our Chairman Mr. Naveen Jindal not only fought a 10 long-year battle to give every citizen the right to fly the National Flag throughout the year with pride and dignity but also has taken many unique initiatives through the Flag Foundation of India to motivate People to draw inspiration from Tiranga and contribute to Nation building”.

Saraogi also informed that JSP’s Angul unit is progressing at a good pace and would become the world’s single location largest steel plant for 27 MTPA by 2030.

Addressing the occasion, Mittal congratulated each and every workforce of the company for their contribution to JSP and to the Nation as a whole .

The students of O.P. Jindal School and DAV Savitri Jindal School participated in the grand celebration and performed various patriotic theme-based Dances and Skits to remind the contribution of our freedom fighters to the nation.

This celebration also witnessed various events organised for Azadi Ka Amrit Mahotsav in which  JSPL Foundation, the CSR arm of JSP, distributed thousands of saplings in the periphery villages, distributed National Flags among people and school students, organised several quiz, drawing, song, essay, etc. competition among the school children on the theme Har ghar Tiranga and Har Din Tiranga . The winners of these competitions were felicitated in the programme. To mark this day, the JSPL Foundation also distributed around 50,000 sweet packets among the school students and children of Anganwadi centres in the locality.

At JSP’s Bhubaneswar Office, President and Group Head (CSR) Prashant Kumar Hota hoisted the national flag in the presence of employees, support staff, and their family members. He read out the Independence Day Message of Naveen Jindal and highlighted the contribution of JSP and JSPL Foundation for inclusive and sustainable prosperity of India.