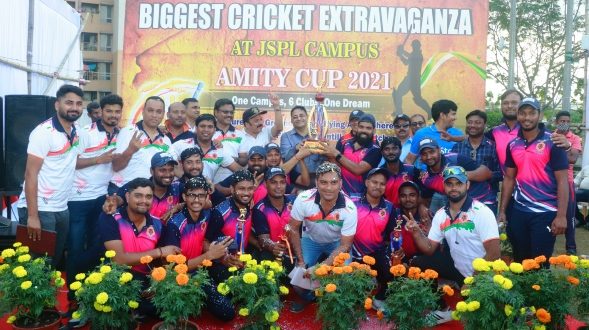 Electing to bat first, SPCB scored 133 for the loss of 7 wickets in the stipulated 20 overs. Chasing 134 runs for victory, team JSPL exhibited a splendid performance and reached the target in 19.2 overs.

Rajesh Pradhan and Dipti Ranjan of SPCB were adjudged “Best Wicketkeeper” and “Best Fielder” of the tournament, respectively.

The “Most Disciplined Team of the Tournament” award went to Team JITPL.

All the winners, runner-ups and players were awarded with trophies.

Six leading industrial teams of Angul district participated in the four-day tournament with their best players and enthralled the spectators with their sporting skills.

Both the Captains Sitikanta Sahoo of SPCB and Debendra Sahoo of JSPL thanked the organizers for organizing such a beautiful sporting event.

The next edition of the AMITY Cup will be held at TATA Steel Meramundali.