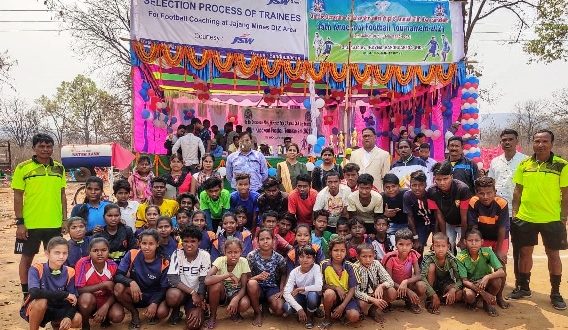 JSW Steel Limited has organized a selection trial for the young football trainees from Jajang Mines region in Keonjhar district. The selection process was carried out on March 12 in presence of the selection committee members.

Of the 150 trainees, 25 boys and 25 girls were selected by the selection committee.

In line with promoting sports in the region, a three-day Inter-State Football Knockout Tournament 2021 was also organized by BDYAM Club at Bandhuabeda village under Jajang Panchayat in support with JSW Steel Limited. As many as 32 teams from Odisha, Jharkhand, Chhattisgarh, Bihar and West Bengal participated in the tournament, in  which Sai Football Club from Sirispal emerged champion defeating Sangeeta FC from Totasahi 2-0 in the final.

Speaking during the award ceremony, Rakesh Mishra – Head HR., JSW Steel Ltd. Odisha (Mines), said that JSW is fully committed to holistic development of sports across the region through its robust grassroots exercise programs. Besides other CSR initiatives, the Company is keen to extend every possible support for the growth of sports and games in the region where it operates.

To mark the closure of the programme, a cultural event was organized wherein folkdance and music were performed by the artistes.